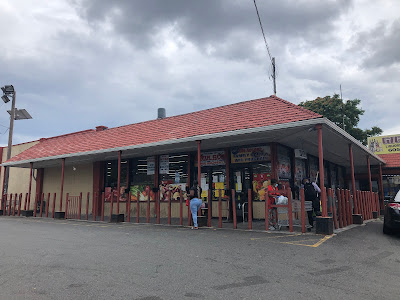 We've returned to Newark, in the northeastern corner of the city, just about three quarters of a mile southeast of Pueblo Meat Supermarket. This store was opened by Twin City/Pueblo owners Alfonso and Myrna Perez before being sold probably around 2000. The new owner has kept the Twin City name and logo but uses a different website, along with a few other changes. As for the store itself, I'm almost positive it started out as a Food Fair (given the signature terrazzo flooring still intact inside) and I know it later became a Mayfair Foodtown. 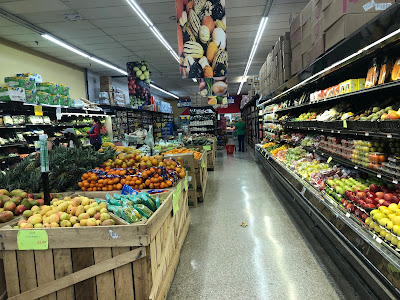 Like all the other Twin City group stores, this one is a well-run smaller urban supermarket. At 17,000 square feet, it's a little over half the size of Pueblo but still has a solid selection. The first two aisles here seem to have been redone very recently, with new cases and shelving towards the back. The grocery aisles run front to back, meaning there are relatively few of them and they're very long. Produce takes up the first two aisles, with butcher, deli, and seafood on the back wall; dairy and frozen are in the last aisle -- just like Pueblo. Unlike Pueblo, however, the front corner of the store has a pizzeria! 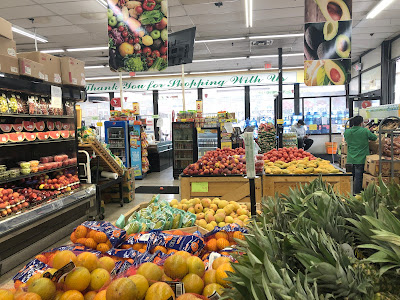 Let's take a second to break down this decor. I'm thinking we're looking at four different eras of decor at once here. Newest, probably installed between 2015 and 2020, is the pictures hanging from the ceiling. That probably would've gone in when the produce department was redone. Next is the thank you sign, which Twin City probably installed in 1994. Then slightly older are the checkout lane markers, which probably were put in by Mayfair in the 80s. Then, of course, is the oldest -- the terrazzo flooring, which probably dates back to the store's construction. 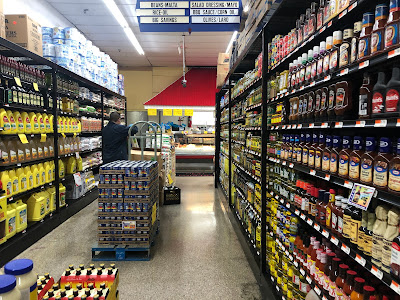 New shelving looking awesome in the first aisle! What's not exactly new is these aisle markers, which we can see a bit clearer in the picture below... 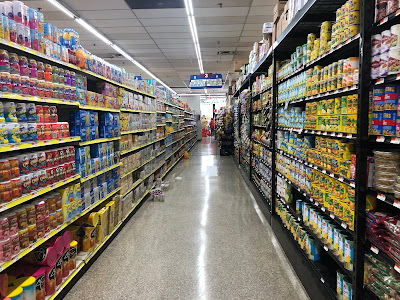 Where the new shelving meets the (much) older shelving. Zoom in to one of those aisle markers. That's definitely from at least the 70s, if not before! I love those combinations too -- whose idea was it to put "tacos" and "diet foods" on the same little sign piece? Anyway, neither of those things are in this aisle anymore. 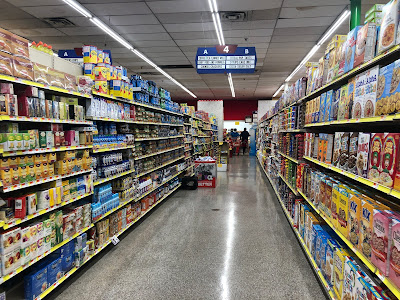 The grocery aisles are looking great though, despite the fact that everything we're looking at is from the 80s or before. Again, so clean! 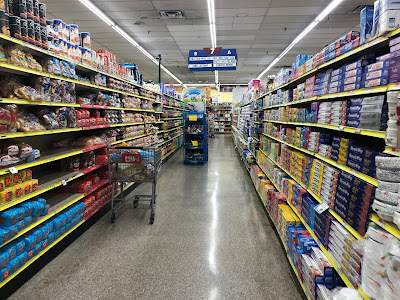 Nine aisles in total, with aisle 8 being nonfoods and aisle 9 being frozen/dairy. The service counters line the back wall, in cases I'm assuming are again left over from Mayfair. This is the same layout we also saw at Super Supermarkets in Orange and Newark -- which were also all Mayfair stores. The awning may be left over from Mayfair or, since it's only in this and Pueblo, might have been installed by Twin City. 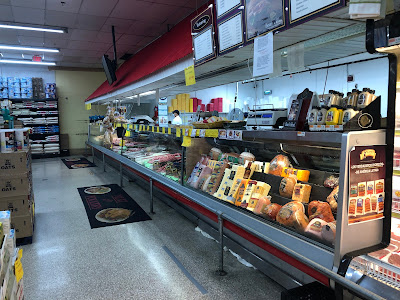 This time seafood is at the back of the first aisle, with meat in the middle and deli to the far right. 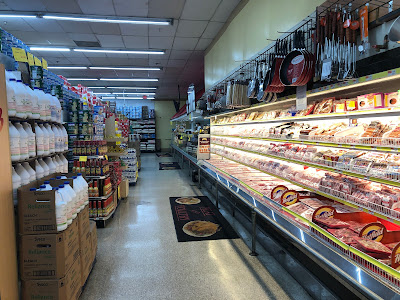 Packaged meats on the rest of the back wall. It's obvious that especially the Orange Super location is a bit more modern than this, but this is a good looking store nonetheless. Plus, I love to see the artifacts still intact here! 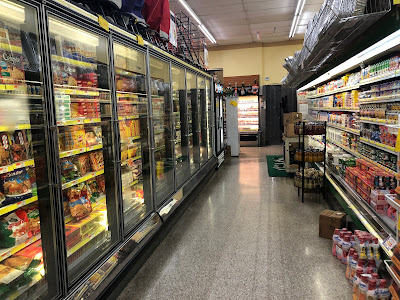 Frozen and dairy in the last aisle. My ability to effectively photograph the whole aisle was impeded by a man and woman shopping who seemed to get in my way no matter what I did. Oh well. 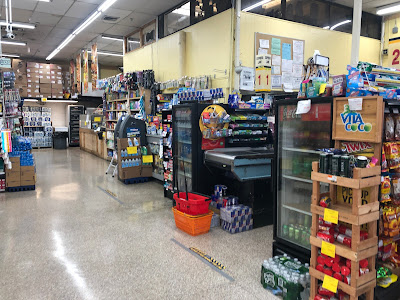 A look at the front-end, with registers taking up about half of the store's width (there's a liquor store in front of the other part we see here). Customer service, HABA, and the pizzeria take up the rest of the front. A little thing that made me smile when I noticed it, the manager's offices to the left have box fans in the windows. This is not surprising -- given their office is on top of a pizza oven! 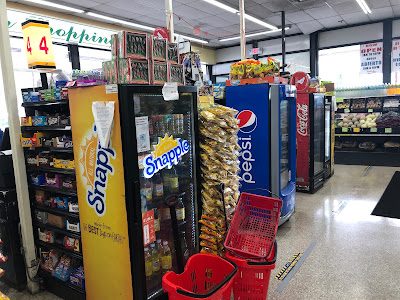 Looking at the other registers in the other direction. The more I think about it, it's really nice to see these old Mayfair stores being revitalized with some great new tenants -- with some history mixed in. This wraps up our look at the northern part of the city, so up next we're heading into Newark's Central Ward to tour another small chain store here on The Independent Edition tomorrow!