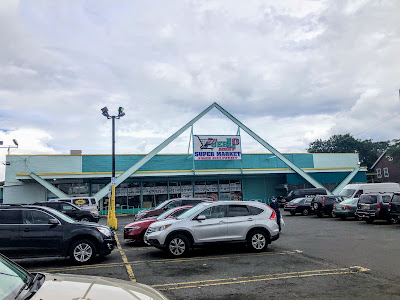 We're here at the far northern tip of the city of Newark to see the large supermarket serving the neighborhood of Forest Hill. Opened in 1987 by husband-and-wife team Alfonso and Myrna Perez, who also run the wonderful Twin City Supermarket in Elizabeth and Plainfield (which we'll be touring when we get down to that area), this 30,000 square foot store was built as a Food Fair and later became a Pantry Pride, being purchased by Mayfair Foodtown in the late 1970s and then Pueblo in 1987. I don't entirely know why this store was not branded Twin City, but there is also a Twin City about 3/4 of a mile south (we'll get there in a few days). 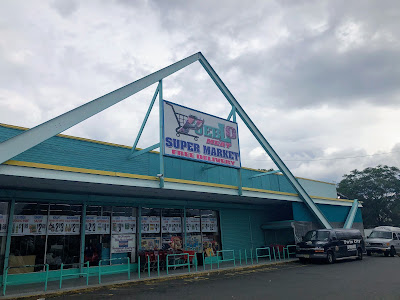 Awful logo aside, this store is looking great today. The blue color is actually pretty bright and fun in person, and the property is clearly meticulously maintained, no different from Twin City in Elizabeth. You can read a bit more about the store's history here. It's very different from the nearby former Bloomfield Food Fair, which is rather decrepit. 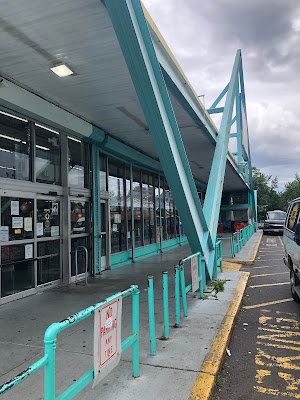 Such a difference from the awning falling apart in Bloomfield! Nice to see that Pueblo has kept up the building. Inside, we'll see the store is nicely maintained if not the newest, with some Mayfair decor still intact. We enter to produce in the second aisle, with sale items in the first aisle to the left. Meat, deli, seafood, and hot food line the back wall with frozen/dairy in the last aisle and continuing into a front alcove, which also has customer service and HABA. 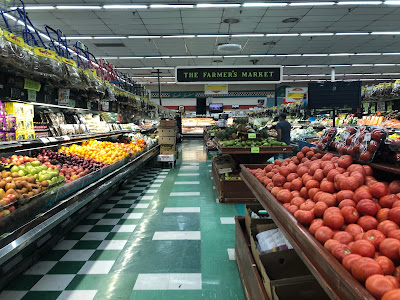 One of the things I love about these 1950s stores (certainly Food Fair and ACME) is their high ceilings. It makes the store feel so spacious! Notice the hanging "The Farmer's Market" sign which remains from Mayfair. I have no idea what the layout would've been when they were occupying the space, but the layout vaguely resembles other former Mayfair locations in Newark and Orange nearby. The Newark Twin City, also a former Mayfair, has a similar layout. 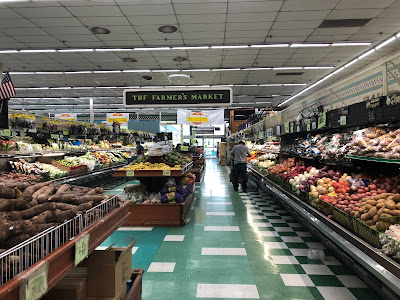 Totally missed the wonderful 1970s "Estimating Scale" on the left side of this aisle when I was in store. See more discussion on the store's decor here between me and Styertowne. 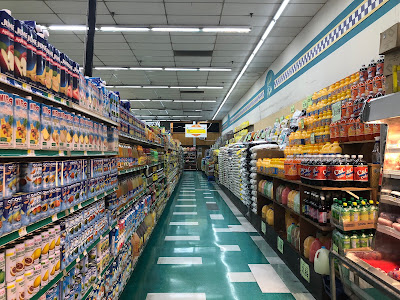 Sale items in the first aisle. If you zoom in, you can see the offices with wood paneling straight ahead, which was probably also previously the customer service counter. 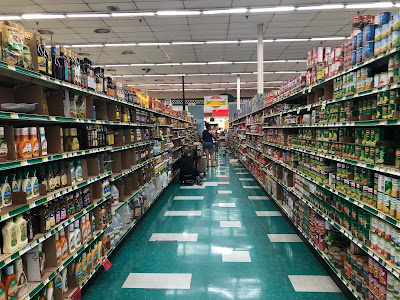 Grocery aisles looking spotlessly clean. Some stock seemed a bit low but I'm pretty sure that's just because this is a very high volume store. Look how shiny those floors are! 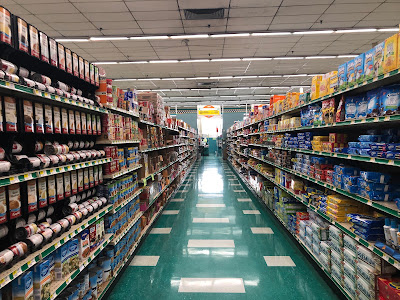 So clean! I was very impressed with that throughout the store. 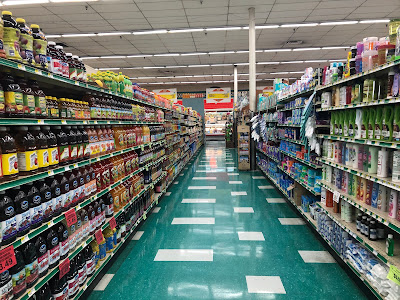 There's a large selection, like Twin City in Elizabeth, of nonfoods products. Including half an aisle of kitchenware... 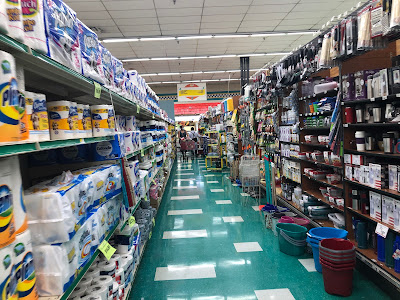 The wooden shelving we see around here is much newer than the shelving in the rest of the store. 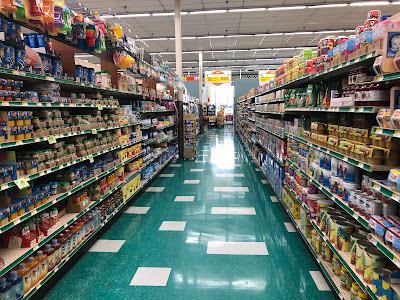 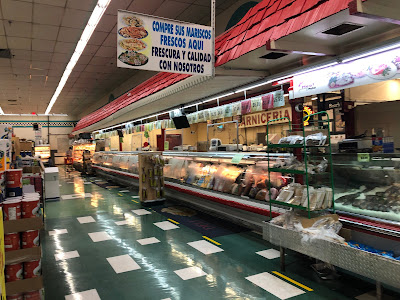 The service butcher takes up about half of the back wall, with a (relatively) small selection of packaged meats. I believe the red awning here is left over from Mayfair or perhaps even Food Fair, but it's been repainted. A side note, the decor package we see in this store is the same that we'll see in Plainfield, but I don't believe it was ever in Elizabeth which currently has newer decor. 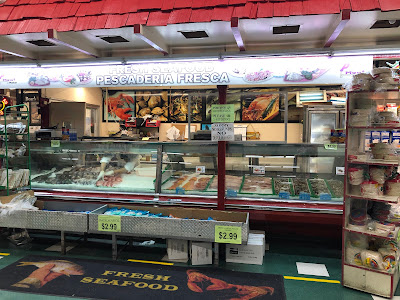 Seafood on the back wall, with a milk case just next to it and then a hot food counter on the side wall. Unfortunately, the hot food counter had too many people around it for me to grab a picture. 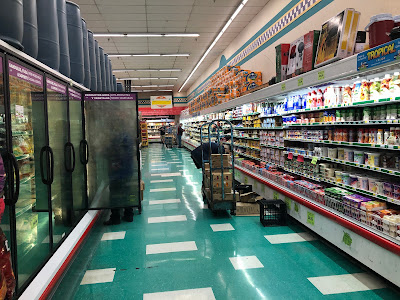 Frozen and dairy lining the last aisle. The dairy selection continues into the front alcove, where I inexplicably took a whole lot of pictures... 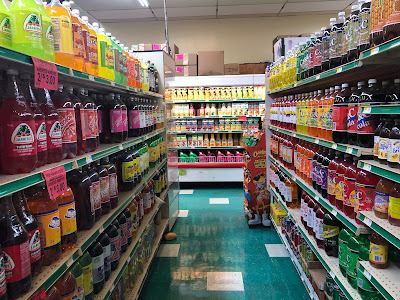 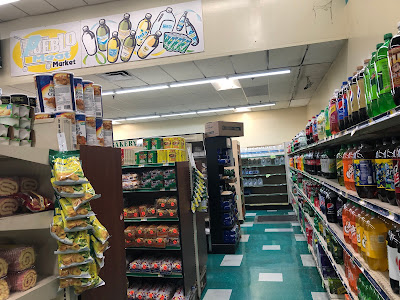 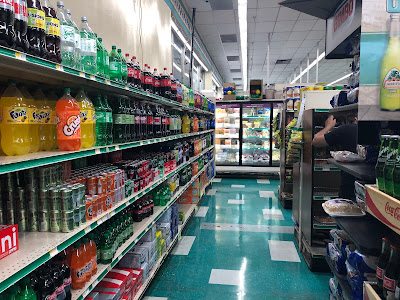 Front wall is to the left here. 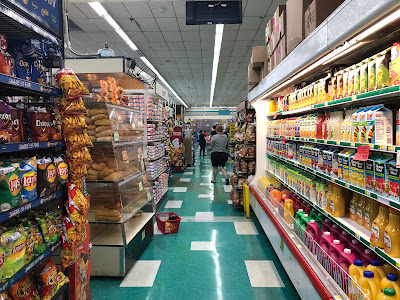 Looking from the front alcove across the front end. At the time of my morning visit, it was just beginning to get busy for the day. 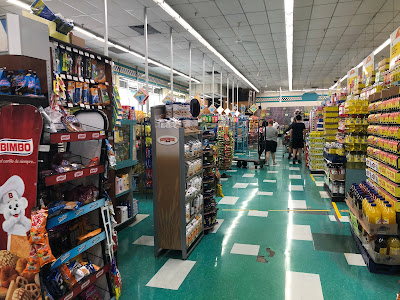 We can see how high the ceiling is here looking across the front end. That wraps up our tour of this Pueblo Meat Supermarket, and we'll be touring the Twin City just to the south in a few days. First, though, we're going to make a detour to the north to see a former supermarket near the Belleville border and then one right over the border into Belleville! See those on the next two days at Grocery Archaeology!