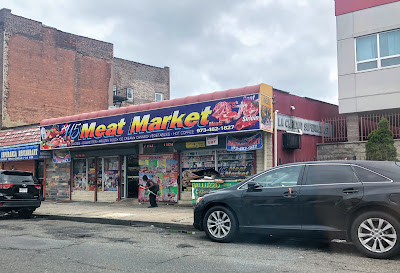 The 115 Meat Market in the Roseville section of Newark was previously Aneuris Meat Market and before that, Glenny Meat Market. And before that, it was La Caridad Supermarket -- a name that still appears on the side of the store! Now this is our first store in Newark, and we're going to kind of circle the city clockwise beginning here in Roseville, which is in the northwestern corner of the city. We'll move up through Ampere right over the border in East Orange then pass through downtown Bloomfield and hit the southern tip of Belleville before circling to the east and south through the northeastern corner of Newark: Silver Lake, Forest Hill (with a quick detour back up to Belleville), and Mount Prospect. Then we'll move into the Central Ward, the Ironbound to the east, then across to the West Side and Weequahic before detouring through Irvington and then back into Newark for Vailsburg. That's a lot of neighborhoods to cover over the next month or so, so come back to check out all those stores. Our second and final Roseville stop is coming up tomorrow on The Market Report!