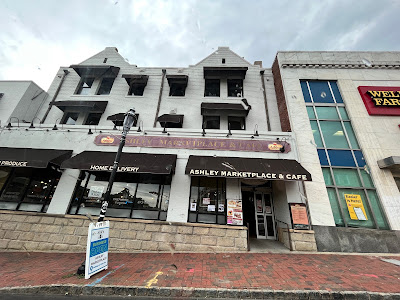 We return to Ashley Marketplace after first seeing it back in the summer of 2018. Unfortunately, the past four years have not been kind to the gourmet supermarket and cafe, with a visit last week showing the store clearly struggling. By the way, the store closed for a few weeks in 2019 "for renovation," but reopened shortly thereafter with no apparent changes. At some point between the summer of 2020 and the summer of 2022, the store did in fact make some major changes to its layout and selection. We're going to take a trip through the somewhat mazelike store from the back entrance, facing the parking garage. 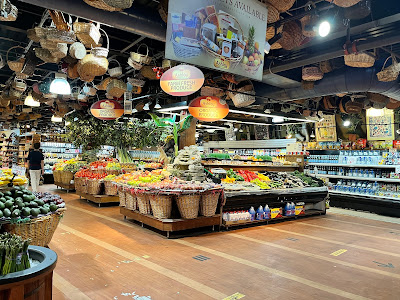 The produce department is actually looking really good with the newly streamlined setup, until we start noticing the shelves and shelves of bottled water in what used to be a produce cooler on the right. Also, oddly enough, the registers have been removed from the back part of the store and replaced with some grocery shelving. 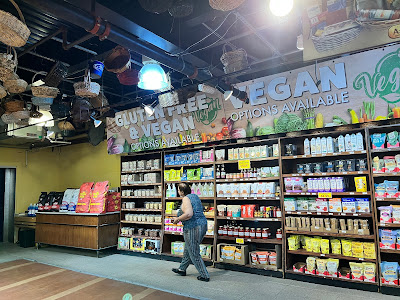 While there's certainly a lot of organic, gluten free, and vegan items here, this is not exactly the natural foods department, given that most of the store is natural foods in the grocery department. You can see the flooring where the registers used to be. Also, strangely enough, the rear exit is still functional, and there was almost no staff around -- so I could theoretically have just walked out with a full cart of groceries and no one would have noticed. Obviously, I didn't, but I did purchase something at the front registers and then have to walk all the way across the store through the grocery aisles to get out the back. Isn't that basic loss prevention? 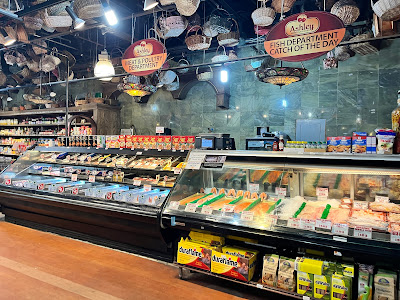 Another sign that the store isn't doing well -- the once-expansive meat and seafood departments have been condensed down to just this corner. There's no longer a service butcher, which used to be in this case that's now seafood. Another case of packaged fresh meat facing is now cold cuts, and other meat cases are now prepared foods and more water, as we'll see. 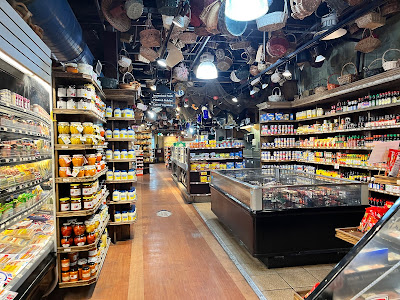 The layout has also been changed slightly to make it a bit less mazelike, with more aisles running straight front to back now. 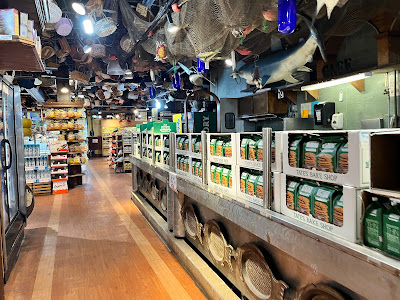 Here's what used to be the huge, impressive seafood counter (we can see the fish props above the counter). Today, it's all just packaged cookies. And around the corner from this case is another case that used to be packaged meat... 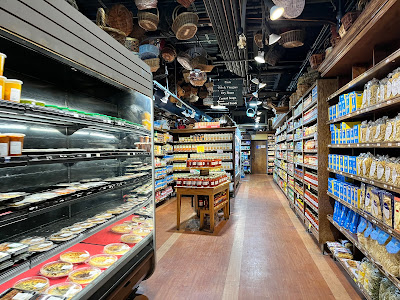 ...but as we see, the store is still quite beautiful. Its decor is unique and very interesting, but maintenance has slipped (and we see that the store is clearly not doing the volume it once was). Another meat case... 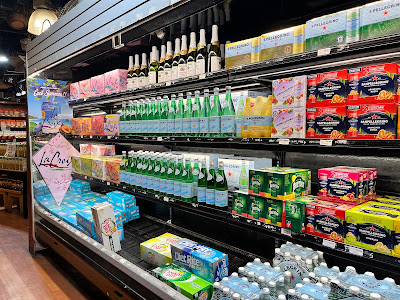 The deli, cheese, and prepared foods departments on the other side of the seafood island aren't looking much better. Most of the prepared foods are gone... 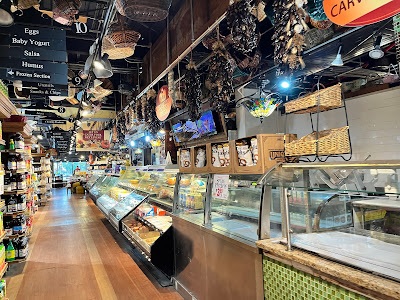 ...and the deli didn't have much to offer anymore either. 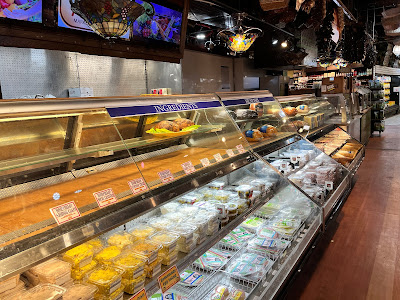 I can't imagine that this store can survive for much longer, if the situation really is as dire as these totally empty perishable departments suggest. We can also see that the store was completely devoid of customers. 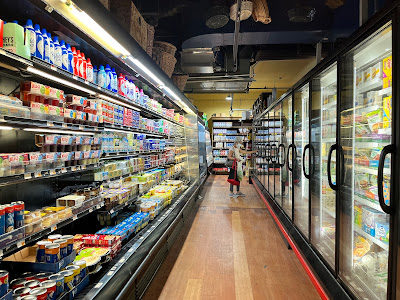 Dairy and frozen look fairly good, if a little light on stock to the left, though. To give credit where credit is due, they did fix many of the flooring problems with new patches, seen where the customer is standing straight ahead here, for instance. 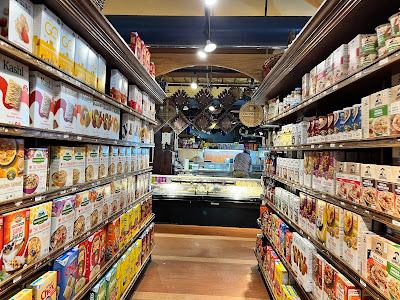 A look down the cereal aisle at what used to be the cheese counter. All the cheese is gone, and downsized to an island or two in the front. 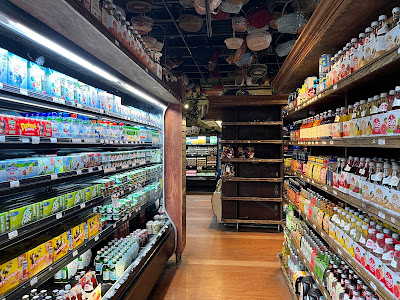 Not sure what this refrigerator originally was in one of the short grocery aisles, but I'm willing to bet it wasn't yogurt and bottled soda. And not sure what's going on with that endcap above. Similarly, these cases were not built for pretzels... 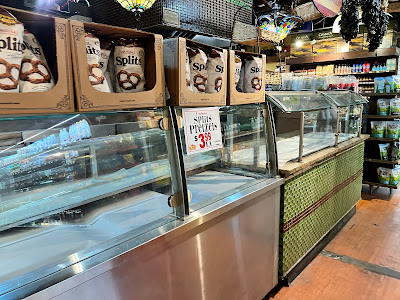 As we get into the front part of the store, we do get a sense of the fact that the store truly is beautiful, it just isn't being run to live up to its potential. Here's the remaining cheese department, greatly downsized, and the salad bar being stocked with Vitamin Water... 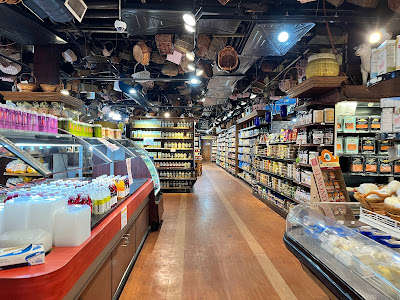 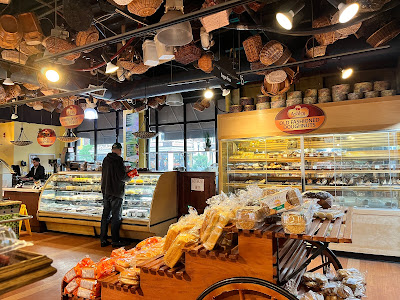 The juice bar is no longer, now replaced with coffee beans. 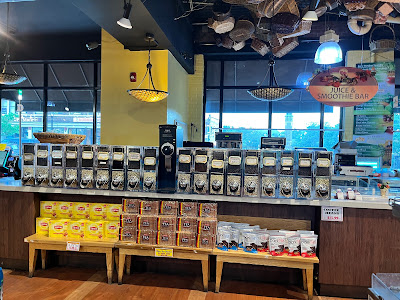 And up in the front, we see that the cafe has been replaced with self checkouts -- probably more than are ever necessary, judging by the state of the rest of the store. It's a shame, since this store was once such a beautiful, premium supermarket. Maybe it can be once again someday! Worth noting that I visited this store right before the brand-new Green Way Markets of Maplewood, and the contrast is stunning. That store is spotless, perfectly stocked, bright, clean, and all around welcoming. I have to wonder if they stole any business from Ashley, or if Ashley has just been gradually winding down for years now. Both Ashley and Green Way are located right at train stations, and I watched the Dover-bound train out of New York City pull into the Maplewood station, and then watched at least four or five people walk straight off the train and into Green Way. Ashley could have that market, but not if they operate like this. 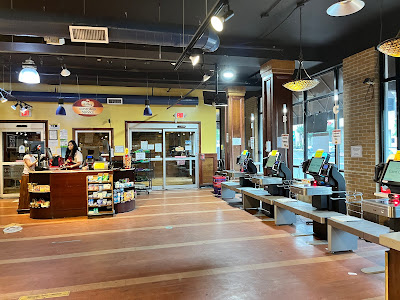 I'll be sure to check back to see if anything else happens here, but I can't imagine this store will be around for much longer. We'll find out. In the meantime, check out today's other stores here:
And we've got more updates coming tomorrow!