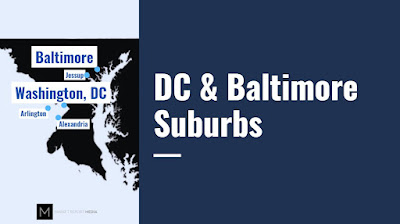 We are continuing our northbound trek from Charleston, South Carolina to [redacted], Maine (ooh, did I leak confidential future plans??) by making a few stops in the DC and Baltimore areas! Now I must admit that it's been quite some time since I was last in these areas myself, and I don't have a lot of grocery stores photographed in this region myself. So this group is interesting in that it's entirely made up of contributor-submitted posts! In fact, the bulk of the pictures in the DC suburbs that we'll start with come to us courtesy of, um, my former roommate's girlfriend's best friend's cousin. No, I'm not exaggerating. We'll be spending a few days in the western and southern suburbs of Washington DC, moving from west to east passing through McLean, Arlington, Falls Church, Bailey's Crossroads, and Alexandria, VA, , then making a single stop in DC itself, before jumping up to a southwestern suburb of Baltimore. And then we're on to Pennsylvania! We have about a week and a half or so of stores to check out around here, and they'll all be on The Market Report except for one here on The Independent Edition.

Oh also, at least for now, we're going to be going back to posting five days a week (Mon-Fri) and taking off the weekends. I have a funny feeling that's not going to last due to the ridiculous number of photographed but unposted stores I have, but we're gonna do it for now. So come back Monday for our first McLean store on The Market Report!

Did you see this weekend's updates? If you missed any, here's the full list.