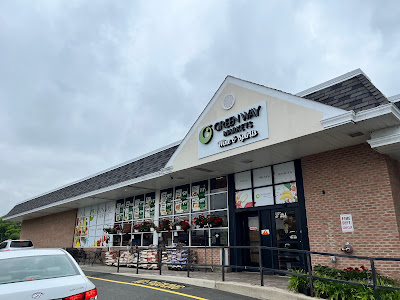 We return to the Green Way Markets of Ridgewood, which just finished its renovation after opening in a former Kings in early 2021. I was frustrated to see basically no change at the time of my December 2021 visit, even questioning whether the renovation was happening at all. Little did I know that in the weeks immediately following my visit the renovation did, in fact, begin in earnest. And it wrapped up in, I believe, late May when they held their grand reopening. I was very impressed with how the store looked when I went back just a few weeks ago, although the renovation was a little limited in scope. 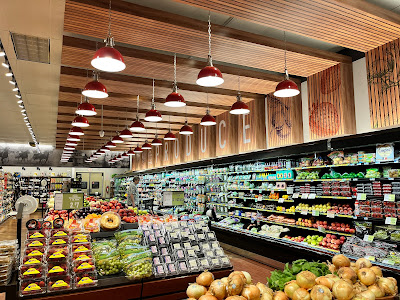 Quite the first impression, though! Check out the floor plan in the January post linked above. You'll see that the produce department and the liquor store are now side-by-side, rather than one in front of the other. So produce takes up what amounts to the first extra-wide aisle, and liquor takes up the second extra-wide aisle. As we'll see, the cheese department has been removed from this area and moved to the left side of the store, next to deli. 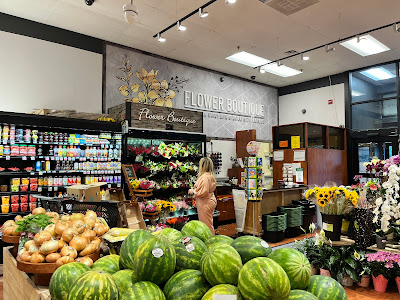 Interesting that in this corner next to the entrance, they opted for floral signage twice (with the smaller one being left over from Kings). There is no signage for customer service, which is visible in that corner also. 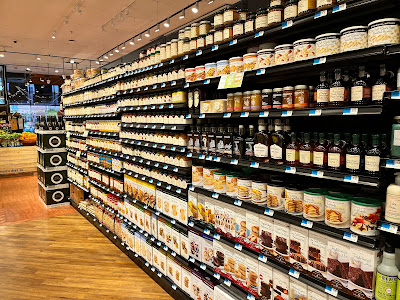 The left side of the first aisle is now home to specialty foods, with a large selection of Stonewall Kitchens products here and Bob's Red Mill behind it. This is around where the cheese island used to be, and notice that there are actually two flooring textures here. The more orange one farther away in the above picture is newly installed, and the more brown one closer to me is left over from Kings. Not sure it's the most harmonious of pairings, but it works. 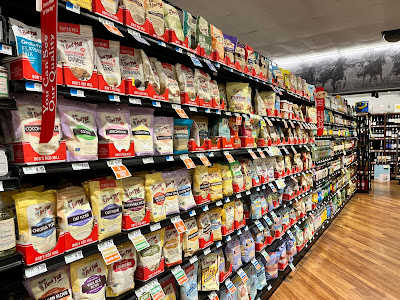 Here's Bob's Red Mill at the back. 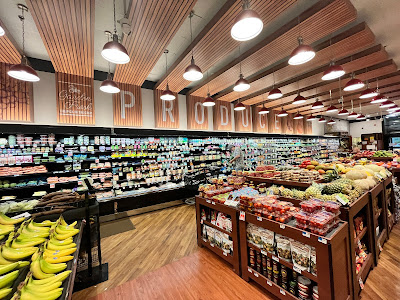 Some of the produce fixtures are new, others are left over from Kings. Don't you think this is what the other Kings stores could look like, now that Albertsons has owned them for a year and a half? What are they waiting for? But I digress. Back to this Green Way. 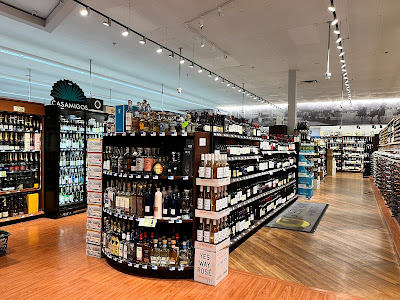 The newly expanded liquor store, with its own register just to the left above, is in the second aisle. Seafood and meat line the back wall behind that, with dairy in the second-to-last aisle and frozen in the last aisle. The last four aisles are shorter to accommodate deli/bakery in the front left corner. On the front end, there's also a bulk coffee bar, a small cafe, and four self-checkouts that were not yet fully installed at the time of my visit. 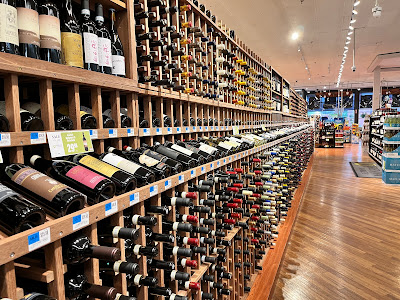 Beautiful new wine shelving, and on the back of this row of shelving is the Stonewall/Bob's shelves. Not 100% sure, but I believe the current liquor store register (visible way at the front right corner of this picture above) is exactly where the cheese island used to be. 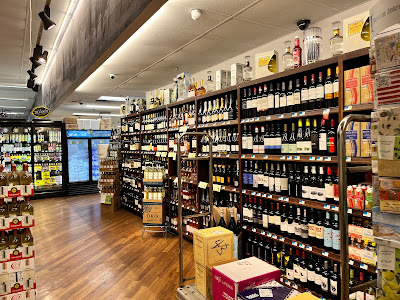 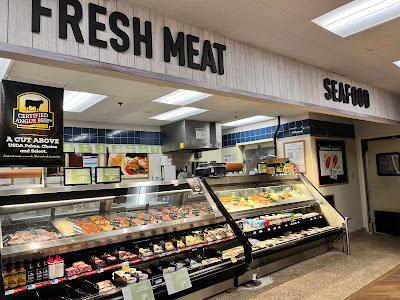 Green Way added a service butcher counter, which Kings didn't have. It does mean they cut back the size of the seafood counter. As we can see, the flooring and backsplash is all left over from Kings here. The grocery aisles feel a lot like a Kings, especially since nothing has been replaced except the products. The shelving, flooring, lighting, and even aisle markers are all left over from Kings. It doesn't look bad, but I'm surprised they didn't replace at least the aisle markers. 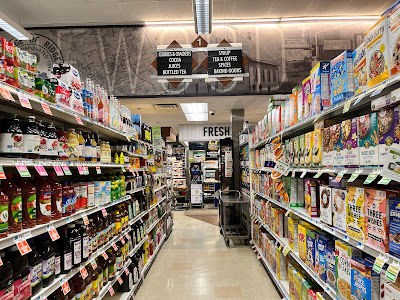 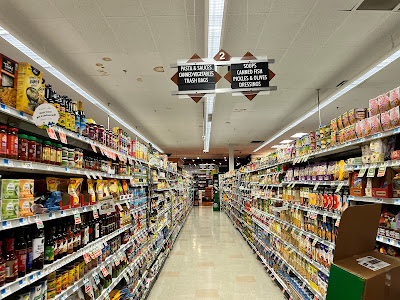 On the back wall, we have the meat department with the service counter visible behind the customer on the right. 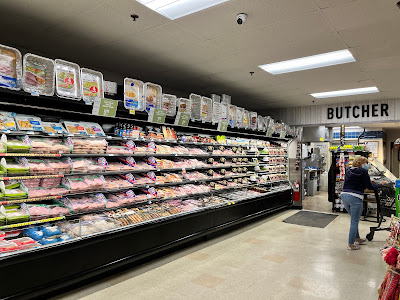 Again, nothing here was replaced except the decor. The flooring and fixtures are all left over from Kings. 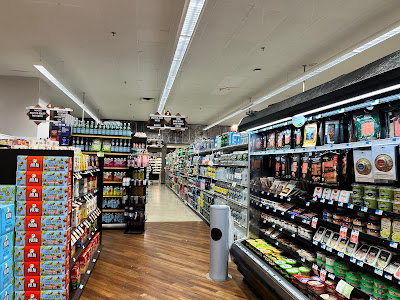 Here we see aisle 3, which is the first short aisle. Aisles 3 and 4 are grocery, aisle 5 is dairy, and aisle 6 is frozen. Small store. 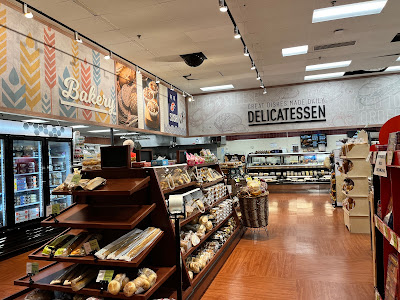 Very nicely redone deli-bakery in the front corner! I think the new flooring looks very nice here. I wish it had been redone throughout the whole store. 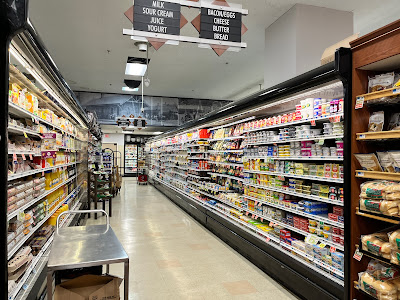 Dairy department in aisle 5. It's also worth noting that this store sells a combination of Green Way (natural), Foodtown (mainstream), and Best Yet (mainstream) items, while the Maplewood Green Way sells only Green Way. 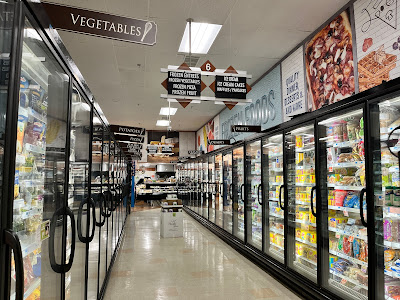 Updated decor in the frozen foods department, but again, the aisle markers and category markers remain. You wouldn't necessarily be able to tell, except for the whisks on the category markers. 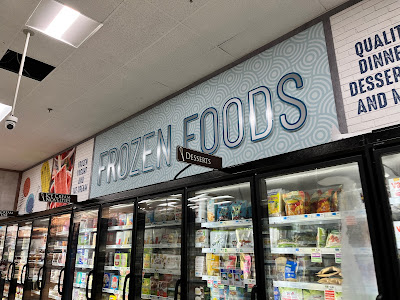 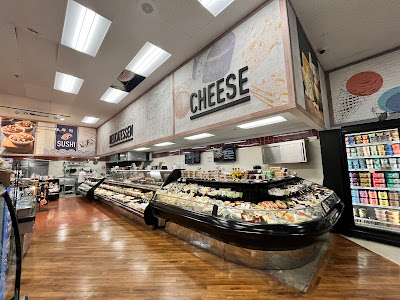 Relocated cheese department (I think it's a new fixture, too) and deli/prepared foods in the front corner. 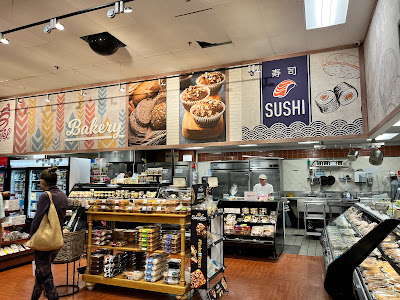 And bakery and sushi are on the front wall. At least in theory -- I didn't see any sushi when I visited, but maybe I just missed it. 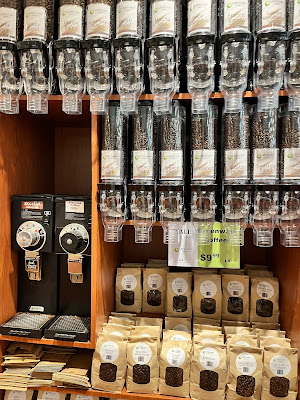 Newly installed coffee bar on the front end, with the cafe behind it. 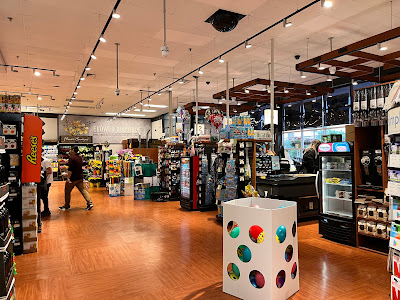 And here's a look across the front end. Note that the hanging light fixtures and registers (including the register lane markers) are also left over from Kings, but it does look good and newly refreshed. Glad to see the renovation here is finally complete! Up next we're headed to the DC area, so check it out tomorrow!