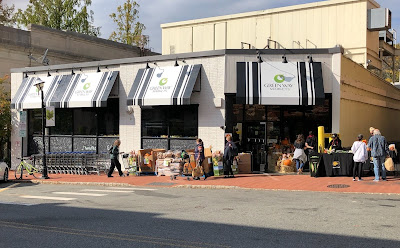 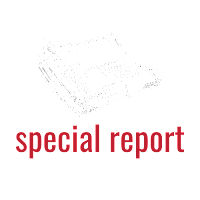 Kings Food Markets closed its downtown Maplewood location in late November 2020 as it was not included in the sale of the chain to ACME Markets. Green Way Markets signed a lease on August 3, 2021 to take over the space and in a crazy fast timeline, the store opened on October 23. We saw it in progress back in August also. While I haven't been back just yet, unfortunately, our contributor Joe visited the store on October 24 to get the full look at the store for us! 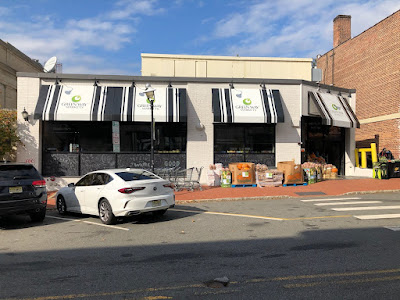 Simple exterior updates with new paint and awnings look very good, though we can tell it's still the same basic building. There are some nice new graphics outside though... 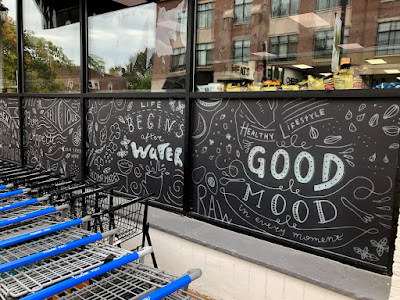 And we see what may be new or refurbished shopping carts that say simply "thank you"... 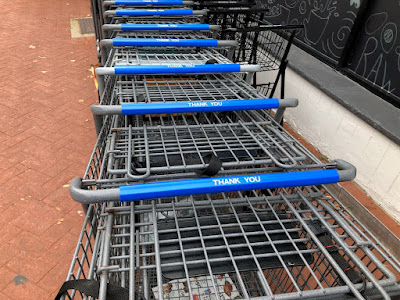 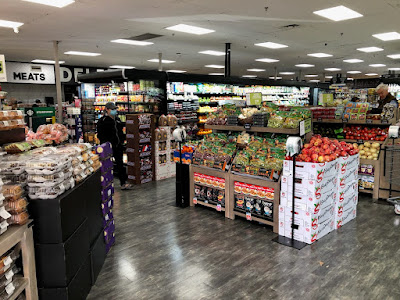 As we can see from the progress photos linked above, Green Way cleared out the entire store and replaced everything. It seems all of the fixtures except the registers are brand-new. 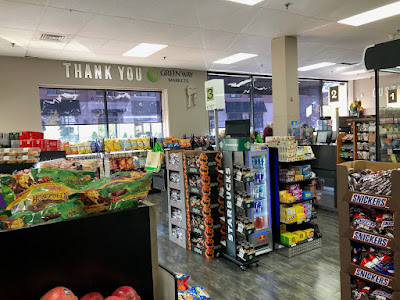 Three registers on the front wall plus two self-checkouts, and Kings had four full service registers. Customer service is in the front left corner. Produce and dairy line the right-side wall, with meat on the back wall, frozen on the left side wall, and deli in the front part of the left side. I believe there are currently four aisles, but it looks like the front half of the store is set up more like the standard grand aisle so it's not exactly aisles. 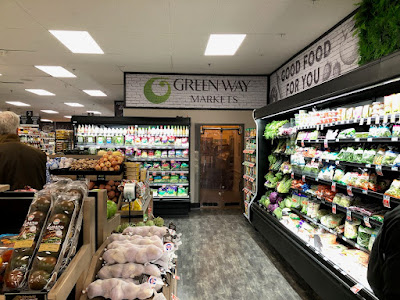 Note that this is more or less the same decor package as the Foodtown in Caldwell. Both are affiliated with the Allegiance Retail Services co-op, and it seems both were designed by DY Design. 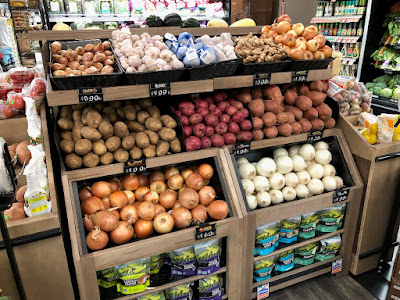 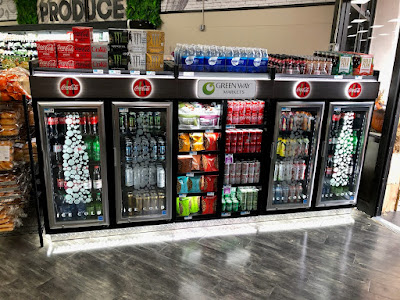 Some brand new merchandising here too, between the entrance and the exit. 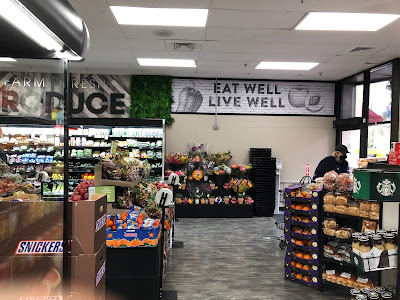 Judging from pictures, it seems that Green Way feels more spacious than Kings. I think it's likely they've slimmed down the selection a bit, probably in general grocery, but again I couldn't say that for sure until I actually get to go to the store. 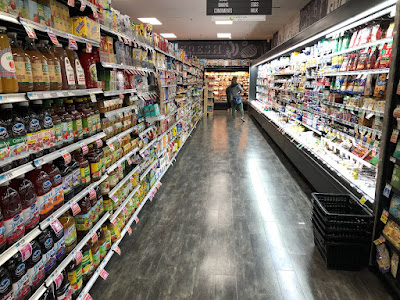 Dairy in aisle 1, behind produce. Love the flooring! 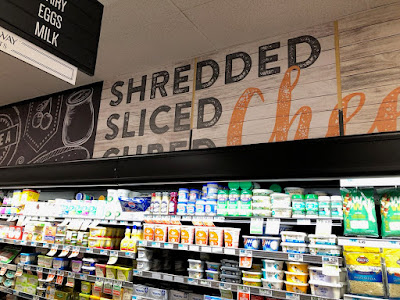 Here's a close-up of the dairy decor. It seems, although I'm not certain, that this store only sells the Green Way storebrand, not the Foodtown brand nor Best Yet, which certain Allegiance stores also use. 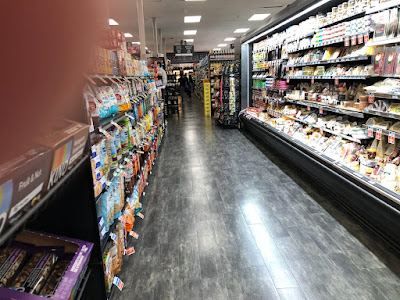 Here's a little half-aisle with cheese on one side and an island with some other things in front of deli. This is the front left quadrant of the store, looking towards the back wall. 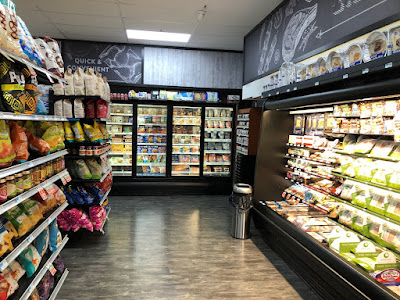 Meat, on the back wall to the right, and frozen on the left side wall straight ahead. Note the Green Way-branded poultry to the right. 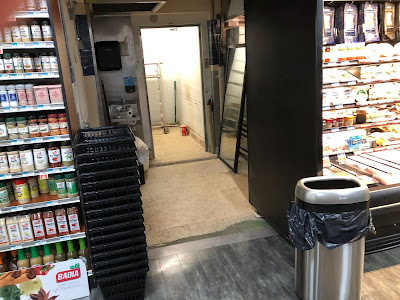 A glimpse into the backroom from the back aisle. We can get a tiny look at the old flooring in the back here. 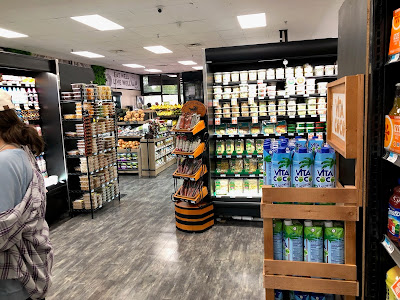 Looking back up towards the front of the store. 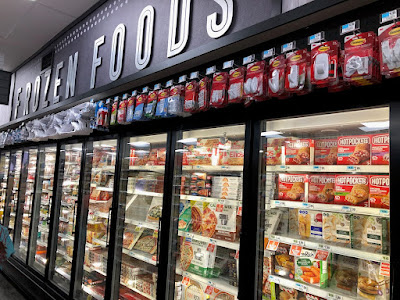 Again, like Caldwell, note that the decor is hung at the front of the cases due to the low ceiling so that it's still visible. Nice! 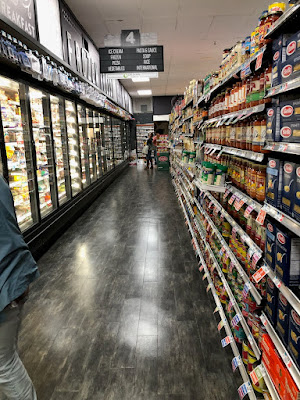 Fourth and final aisle looking towards the back of the store. Looking great with all-new flooring, shelving, cases, lighting, and signage! 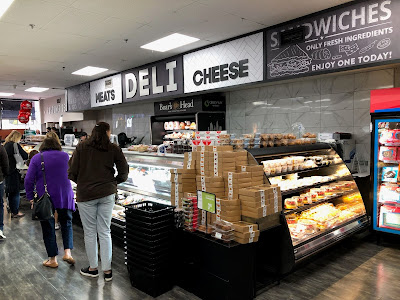 Here we have the deli, relocated from the back left corner to the front left corner of the store. This is the only service department in the store. 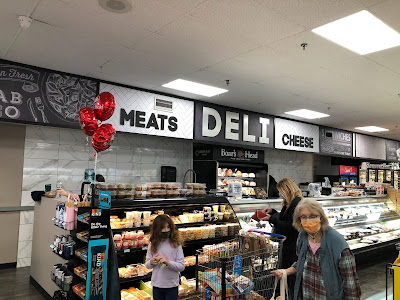 Customer service is on the left side wall just to the left of the deli, with the self-checkouts in front of it. 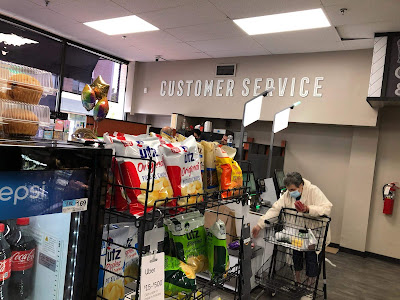 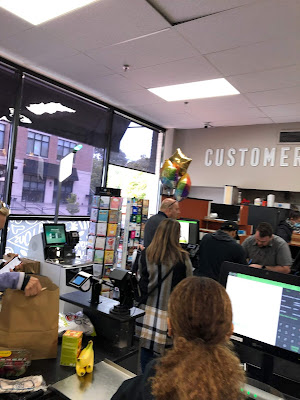 Actually, it looks like there's at least one more self checkout on the front wall. I have to get to the store myself! 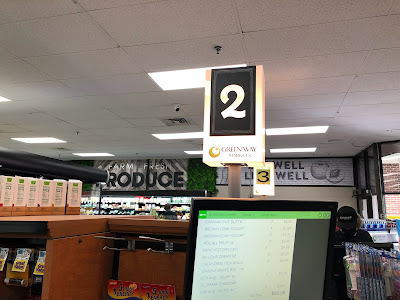 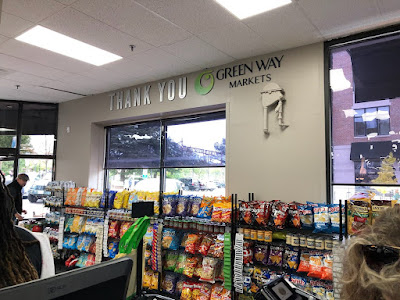 That's all for this Green Way, and thanks to our contributor Joe for the photos! We'll probably be seeing this store again, and that'll be when I get to return myself. For now, this coverage will do just fine and check out the other posts for the day here! By the way, this is the fourth Green Way Market, with the others in Cross River, NY (former D'Agostino and then DeCicco's); Ridgewood, NJ (former Food Fair and then Kings); and West New York, NJ (former Associated and then Freshco).