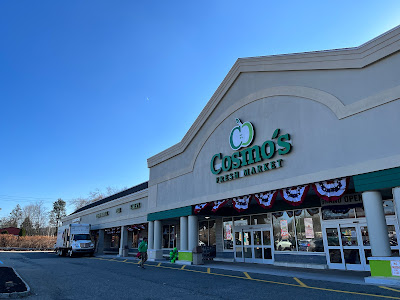 Welcome to Cosmo's Fresh Market! For today's first Special Report, we're checking out the new store that moved in where Highland's Market was previously in West Milford. Highland's Market was owned by an operator whose stores regularly failed quickly (South Amboy, Elizabeth, Middlesex, and this one), and who is now working on opening what might be a Shop Well or possibly a Shop Fresh depending on who you ask in Hackettstown. But Highland's Market in the Hewitt section of remote West Milford, New Jersey, was sold and after some small changes is now Cosmo's. 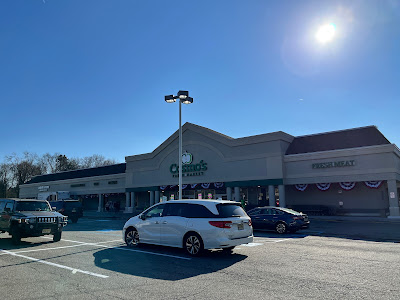 The Narvaez family owns Cosmo's, and they are the family behind the La Placita supermarkets. Clearly, they're much more experienced in the business than the Nassers and have had more success. The execution in this store is also far better than Highland's Market. Interestingly enough, although the Narvaezes' other stores are Krasdale-affiliated, this one is actually affiliated with ASG's Met Foodmarkets group -- as was Highland's Market. We'll see that, because the transfer happened within ASG, there was a lot of consistency but the store is much better-run these days. 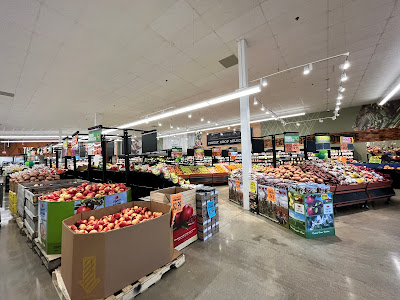 Although the decor hasn't changed and most of the fixtures are the same (and they were barely two years old, so I don't blame them), a lot of new stock has been brought in. The selection in Cosmo's was noticeably larger than that of Highland's, and the prices were also better. 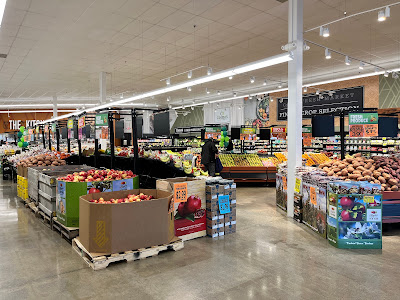 The decor has been seamlessly transitioned from Highland's to Cosmo's. I assume that, because the store stayed within ASG, they were likely able to pull in the original designers to adapt the existing decor. 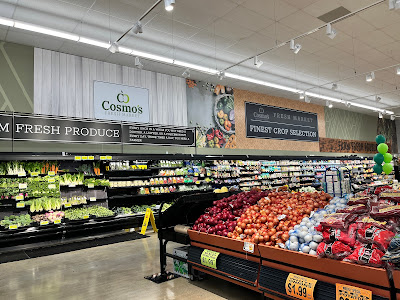 The produce selection was much wider in Cosmo's, and they've clearly brought their perishables expertise from La Placita into this store with fantastic meat and produce. 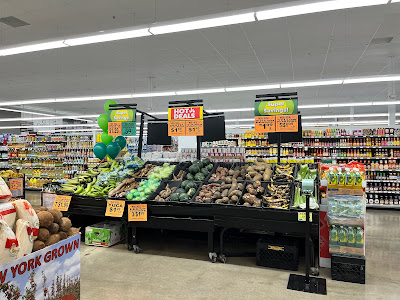 There's also some more interesting merchandising, such as this display of international and ethnic produce items. 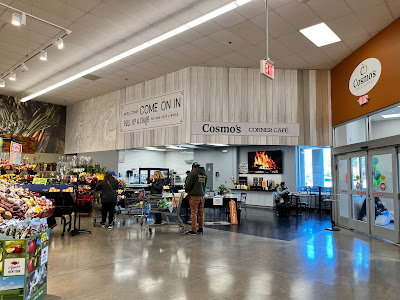 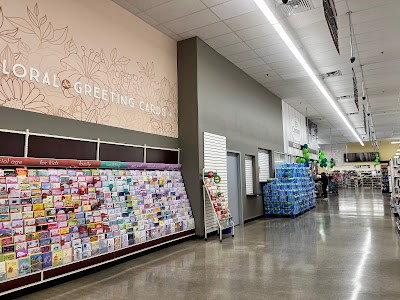 Cosmo's did remove the pharmacy on the front wall, but as we see, basically the rest of the store looks the same and in most cases, slightly better. 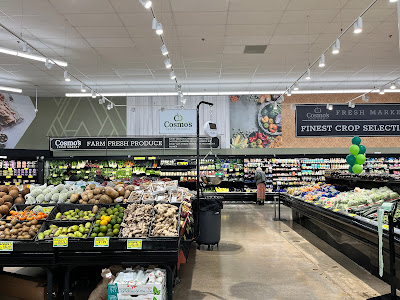 We can see just how much more selection there is in produce here. 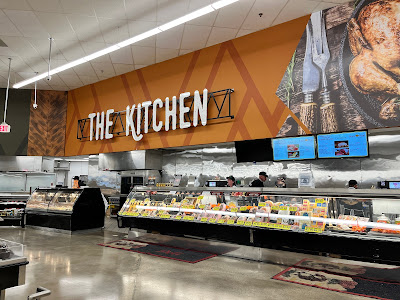 Deli was also beautifully stocked with a really nice cheese island just out of frame here. In each department, selection has been improved compared to Highland's Market, as has pricing. 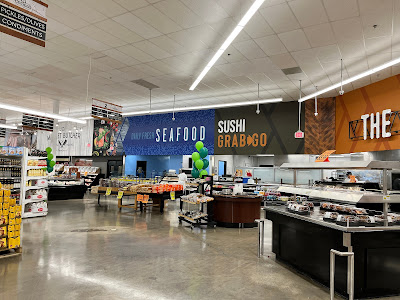 The store does still carry the Avenue A and Best Yet storebrands, along with Full Circle for organic and natural items. But there have been some changes on the back wall... 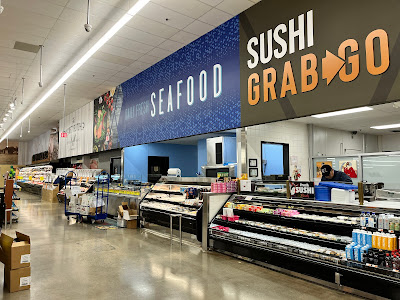 Sushi now has a large sign (there was a smaller sushi bar at Highland's Market, too) and the former bakery department -- which did not have any in-store baking -- is now a full-service seafood counter. And a really nice one, too, with a lot of beautiful fish out on ice. The service butcher counter (which Highland's Market never really opened anyway) has been removed in favor of more packaged meat cases. 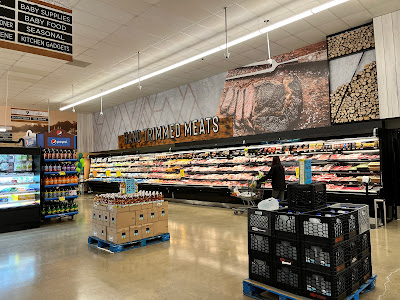 In the grocery aisles, we see a lot more selection but no major changes. 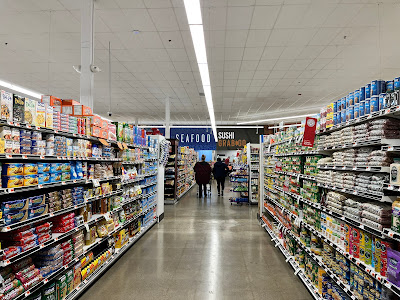 Even the aisle markers just got a new panel at the top replacing Highland's Market with Cosmo's Fresh Market. 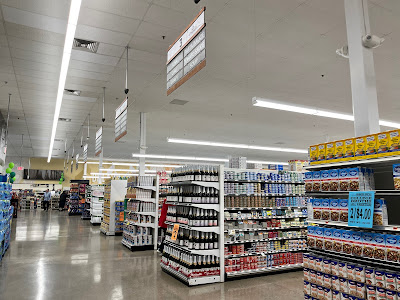 Although there is no longer a pharmacy, there's still a very large HABA selection for an independent supermarket. 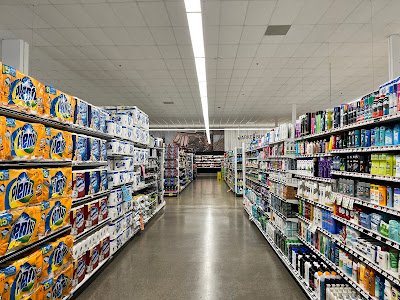 Cosmo's appears to have added a case for cold cuts and hot dogs in one of the grocery aisles at the back -- which is a little awkward, but not a bad decision. That allows for more fresh meat in the meat department. 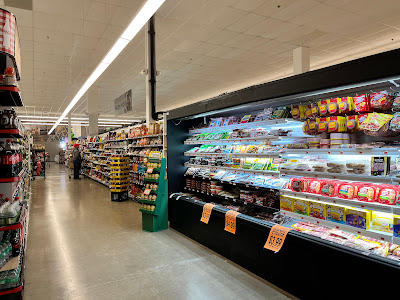 Overall, Cosmo's is a much more professional store than Highland's. Staff and management had sharp-looking uniforms, signage was clear and easy to read, everything had a marked price, no hand-written price signs here. The store even has custom-printed sale tags... 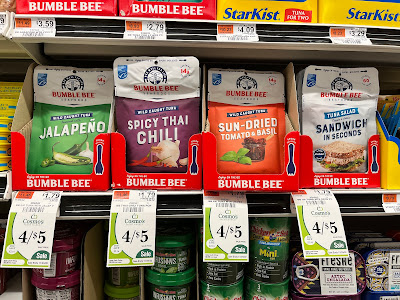 Not much changed at the frozen/dairy end of the store, except for the fact that the shelves are fully stocked... 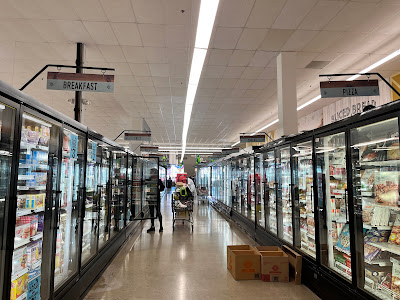 Again, the existing signage has been well-revised into new Cosmo's signage. If you didn't know this decor was adapted from a previous tenant, you wouldn't be able to tell. There are no obvious labelscars or anything like that. 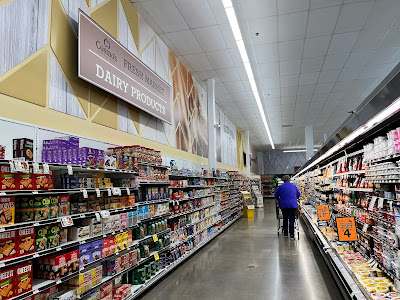 I suppose the only indication would be this oval Cosmo's logo on the front-end... 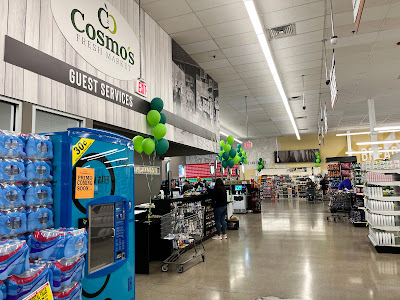 And by the way, I'm not 100% clear on who owns the liquor store. I don't know if that was and/or is an outside vendor, if that's now owned by Cosmo's, or if Nasser still owns it. 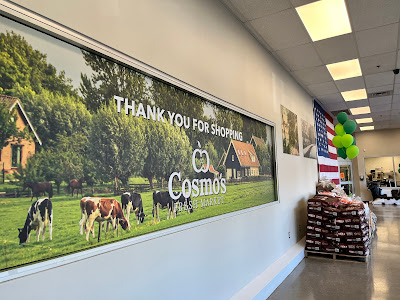 All around a very professionally-done conversion. I was very pleased and I think Cosmo's is much better-positioned to succeed than Highland's Market was. But of course, time will tell! Don't forget to see everything else we're checking out today here!