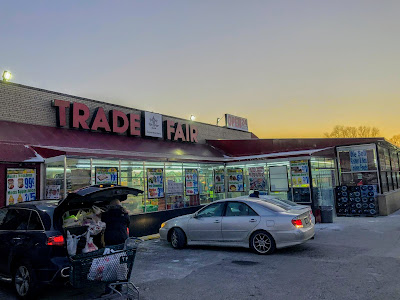 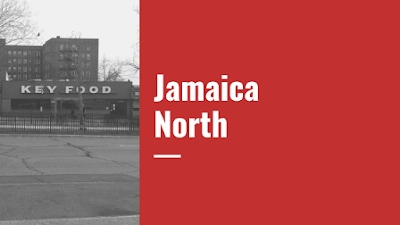 Trade Fair is a small New York City chain with eight locations in Queens. Many of their stores are probably former chain stores, but all of them have been owned by Trade Fair for a long time. All of their stores are open 24/7, and most of them are located in western Queens near Astoria. This is the farthest-east location.

I visited this store (and the others in Jamaica that we'll be seeing) on an absolutely frigid day in December. It barely got into the 20s all day, and by the time night fell, it was very unpleasant. It sure was nice to be in the heated car, that's for sure. 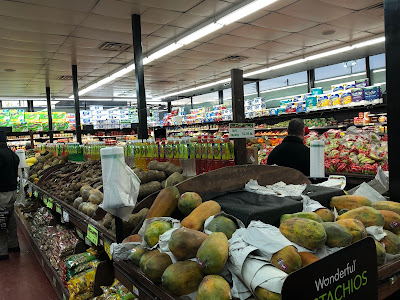 This store has been expanded from its original 10,000 square feet to a significantly larger 18,000 square feet, though the actual construction work feels haphazard and temporary. You can see in the exterior photograph that much of the store's sales floor is made up of little more than enclosed awnings. 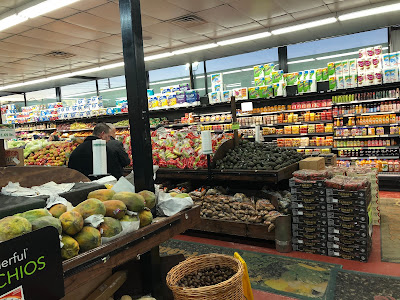 The produce department, located entirely in the expansion, is quite large. It continues partially down the first aisle. Dairy and cold cuts are in the first aisle in the original store, with meat and seafood along the back wall. Frozen takes up the last aisle with deli in the front corner. 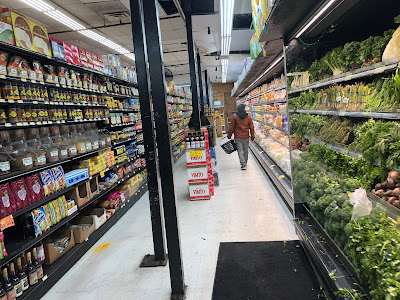 This was my first and only Trade Fair, and it was simultaneously great and depressing. The selection of Middle Eastern foods is outstanding, but the facility looks like it might collapse any minute. The selection is fantastic, but all of the department signs are useless (as we'll see shortly). I really don't know what to make of the store. It didn't help that the only two managers I encountered, both in the produce department, were very visibly grumpy. Maybe it was just a bad day -- I don't know for sure. 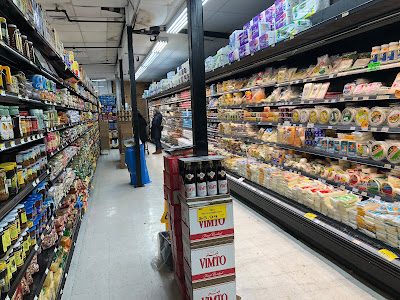 The first few grocery aisles are located in the expansion, and are all international foods. Note the international dairy separated from the regular dairy, which is a few aisles to the left. Also note that this is a perfect example of what I was saying -- amazing international variety with nice new shelving and dairy cases, and then a wall made of plywood, a ceiling that's weirdly sloping and full of holes. 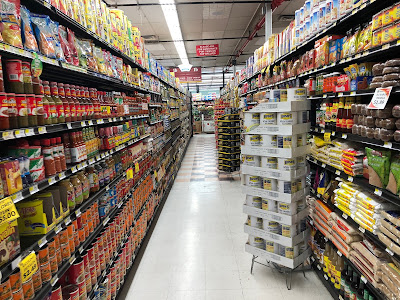 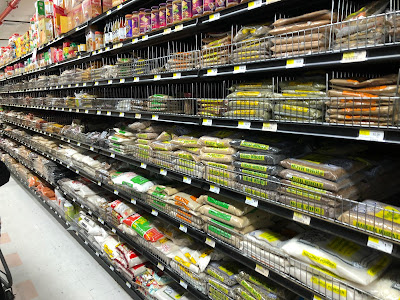 Huge selection of Middle Eastern dry goods, which was quite impressive. This is the third international aisle, with the fourth aisle being in the original store and filled with cold cuts and dairy. 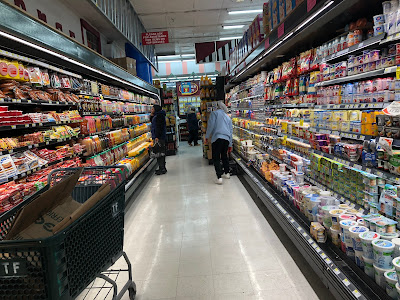 Hang on... what is that lettering on the wall? 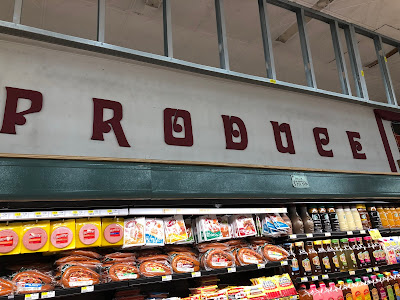 Oh. Some digging on Google Maps shows that until about 2017, produce was in this first aisle. Not sure how the expansion area would've been arranged before that point, as that long predates the move of produce. It does look like the expansion section was all international before that point, but it's hard to exactly determine the layout. Also, does anyone recognize this decor? I'd be inclined to say Trade Fair installed it when they moved in back in 1994 but it could also be from a prior tenant. 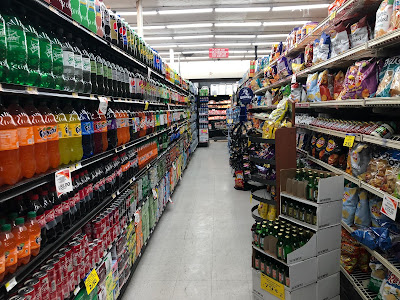 Nothing too surprising in the grocery aisles. 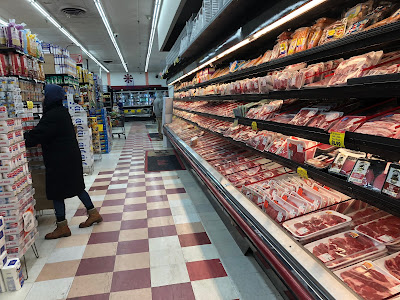 Looking along the back aisle we can see some more old decor in the frozen department on the far wall. Seafood is just next to it. 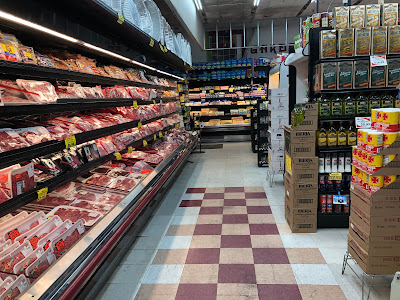 And looking the other way along the back wall, we see more old decor (the beginning of the word "garden"), and I think that used to be a picture of produce to the left of the word. The framing in front of the decor confuses me, because it looks like a wall was supposed to be installed there (why? what purpose could it possible serve?), and the store shows no signs of being under construction. Perhaps an earlier renovation that was never completed. 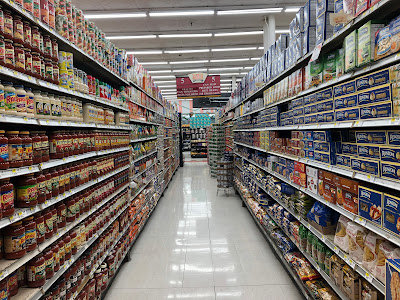 Lots of selection in the grocery aisles thanks to the tall shelving. 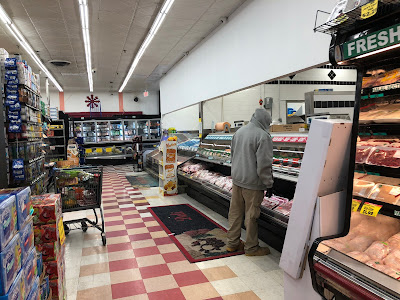 Halal butcher, regular meats, and seafood in the back corner. Again, the blank wall above the counter looks like it was never finished, and it almost feels like this section was built out recently (which, judging by the tile on the walls, it wasn't). It certainly was a later addition as the last aisle continues farther back than the rest. I can't confirm whether this has changed at all since my visit, it's possible I caught them in the middle of a (rather tidy) renovation. 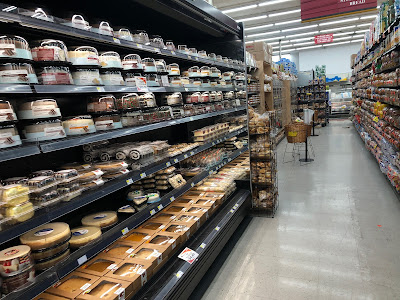 The store doesn't have a service bakery department (well, kind of, we'll see) but baked goods take up all of one side of the second-to-last aisle. 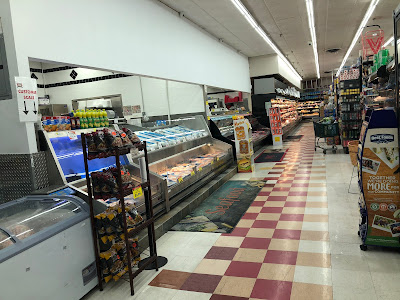 Frozen foods in the last aisle... 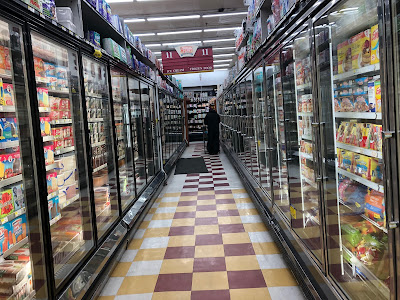 And if you wanted more old decor, you will not be disappointed. So much great stuff to see here, from the lettering itself to the stripes painted on the wall to that loudspeaker in the far left! And check out that ceiling -- that's got to be original! 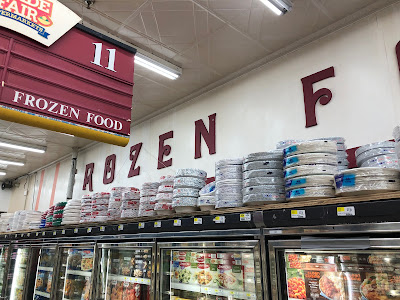 Deli, hot food, and a tiny bakery counter are in the front corner. 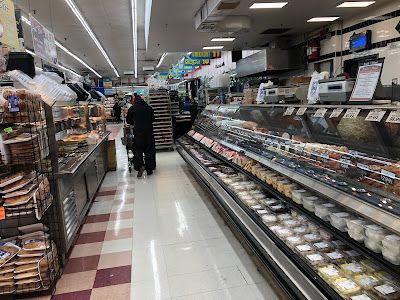 The hot food and salad bars are displayed with one side glass -- which is cool, but why not just open up both sides for service like most? 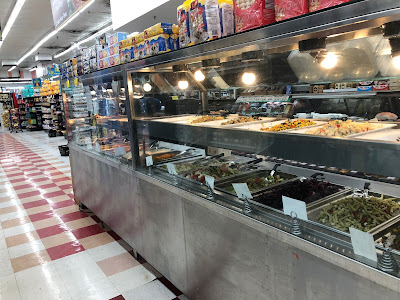 Tiny bakery next to deli (but remember, most urban stores like this don't have bakeries). 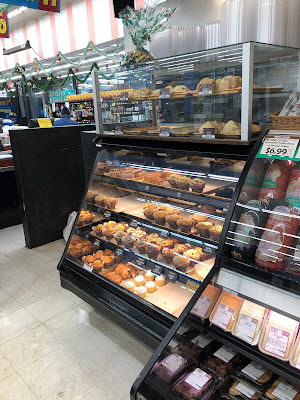 You can see the stripes along the top of the checkout area to the left as well. I don't recognize the decor at all. 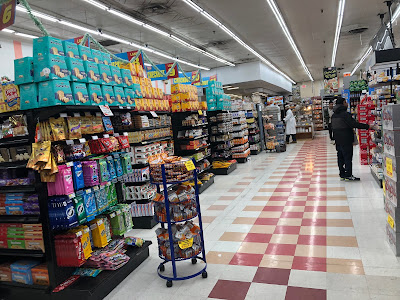 Looking along the front end from the produce side. Again, we can see kind of a hodgepodge of old and new, with the deli-bakery area looking newly built out but no decor and no evidence of a renovation in progress. 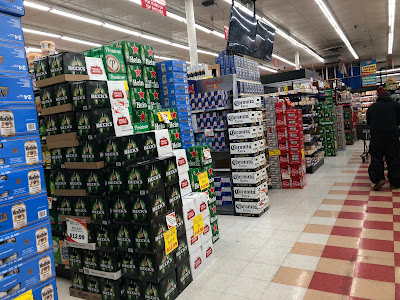 A look back towards the produce/dairy side along the front end. 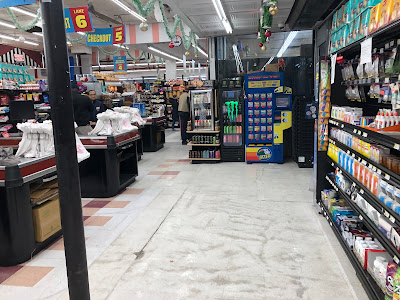 And I don't know exactly why I even took this picture, but I did, so here we are. My guess is the storefront was pushed out at some point, with larger registers installed (judging by the floor pattern, I doubt the aisles were extended and the registers pushed forward). I can't figure out what that window straight ahead is looking at -- or is it a one-way mirror to a manager's office? Anyway, I leave you with these pictures to draw your own conclusions -- this Trade Fair was too confusing for me. I have no idea what to make of it but would certainly visit a Trade Fair again. The remainder of the Jamaica North stores are pretty straightforward so stay tuned for that!