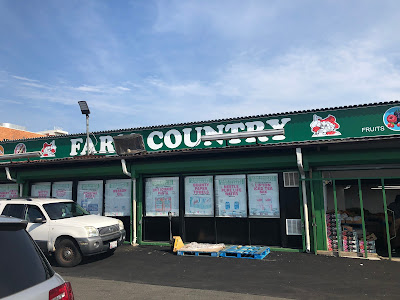 Bad alignment with this photo here. Far Country! I promise you there is an M under the light. Today's store tour is this supermarket in East New York right on the main thoroughfare, Linden Boulevard. It's clearly been a supermarket for many, many years (in fact, the "front" of the store, or the side that faces Linden, may be an extensively renovated former A&P, though I kind of doubt it), but Farm Country has set up shop here and turned it into an enormous warehouse store with every type of African and Caribbean grocery item you could imagine. There is a large parking lot in the back. 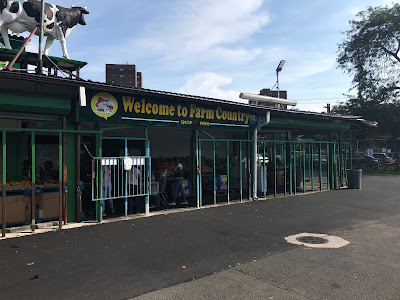 This Farm Country joins a few other locations run by the same group:
And to be completely honest, it's been over a year since I visited this place, and I wasn't even too sure about the layout when I was standing in the store, so this post will be rather light on layout description. It goes something like this: enter on the right side of the back wall into produce, walk to the front of the store to seafood in the front corner on the right side. Meat and dairy come next in the counterclockwise circuit and grocery comes last, with checkouts either on the side or back wall. It's quite mazelike! 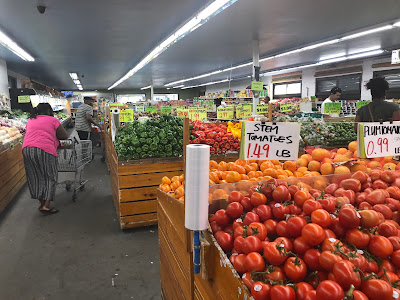 Huge produce department with lots of extremely fresh products! I was quite happy with the quality of the produce, and the pricing tended to be lower although some items were quite expensive. Heavy emphasis on Caribbean products. 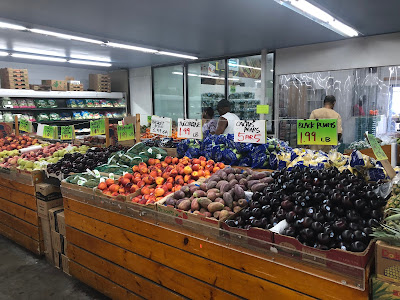 There's certainly a huge selection here, and plenty of items that you wouldn't find in an average supermarket! Plus a full line of the staples... 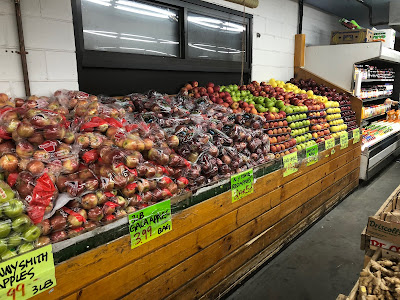 The far end of the produce department (closer to Linden Blvd) is bulk foods, with seafood in a separate room. I appreciated the seafood room because seafood always smells, and the room really helps with that! 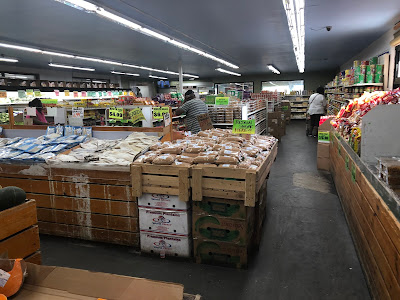 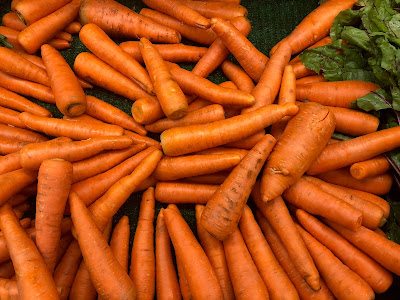 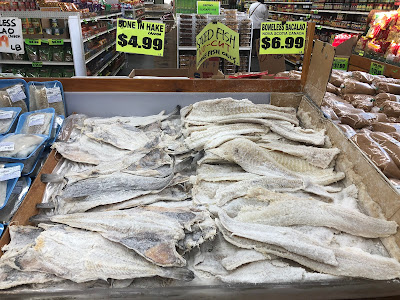 Loose salt fish is a staple in Portuguese supermarkets, but it can also be quite common in Latin and Caribbean markets. 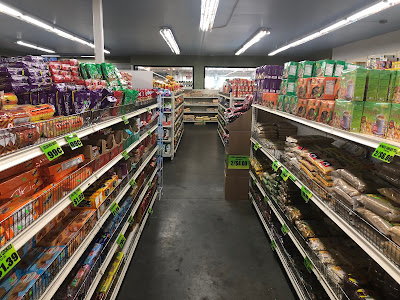 More bulk African and Caribbean products at the back of the produce department before you reach seafood (visible through the windows at the back). 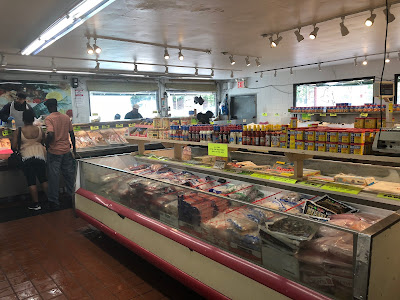 Enormous seafood department at the end of the produce aisle. Service counters line the front wall of the store (facing Linden Blvd), with self-serve freezer cases in the middle and self-service loose fish on ice around the rest of the perimeter. 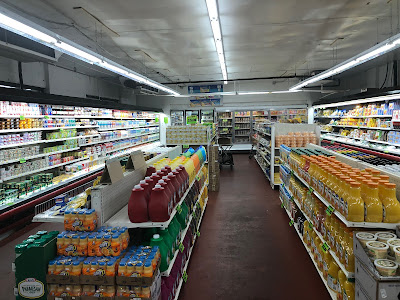 Dairy and frozen in a walk-in refrigerator room. This is somewhere in the middle of the store, but I couldn't tell you exactly where. 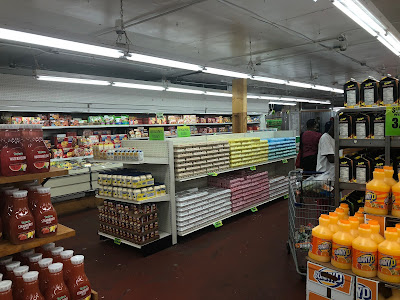 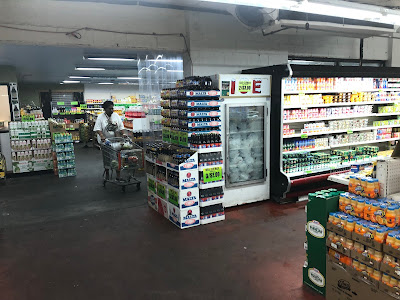 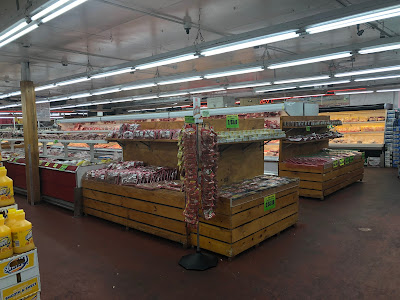 Huge walk-in cooler for meat, including special orders and wholesale for bodegas and restaurants. 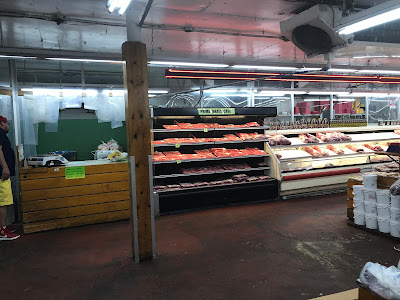 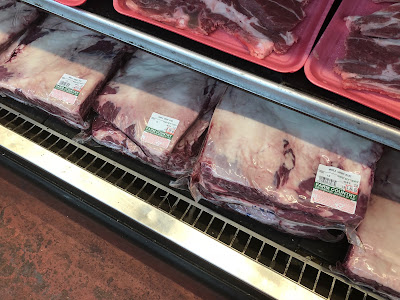 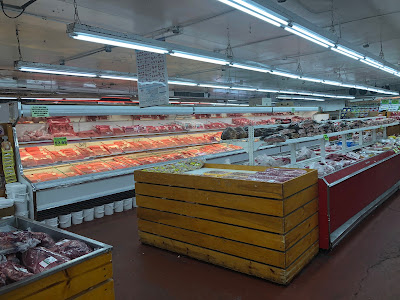 Alright, now let's head over to the grocery aisles, which are pretty much exactly what you'd expect. Lots of awkward corners... 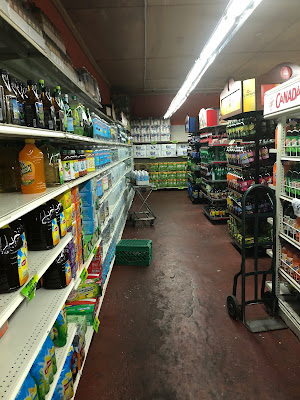 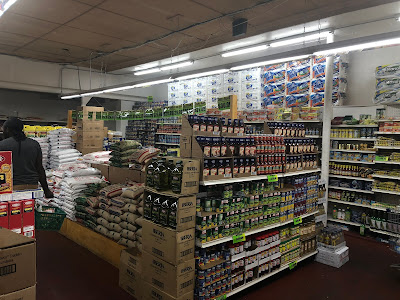 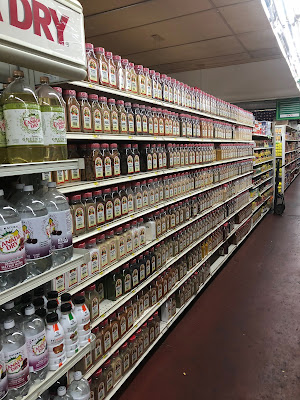 ...grocery staples, such as ramen, pancake syrup, and canned chiles in the same aisle... 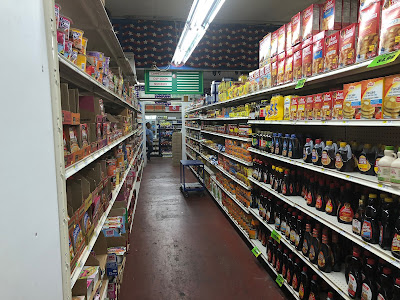 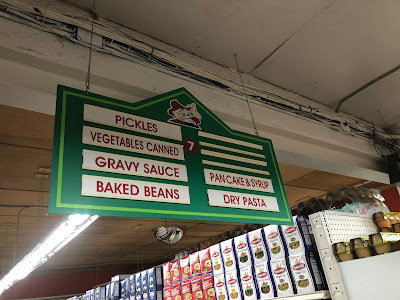 (Side note: I swear this farmer guy is lifted out of a public-domain cartoon, probably of the 1940s or 50s, and I would guess a Noveltoon, although I can't place him at the moment. Before supermarkets, old cartoons were my obsession, and instead of supermarket pictures and circulars, I collected cartoon DVDs and VHS tapes.) 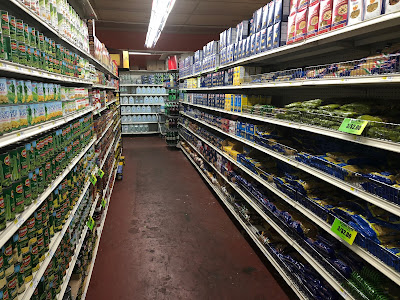 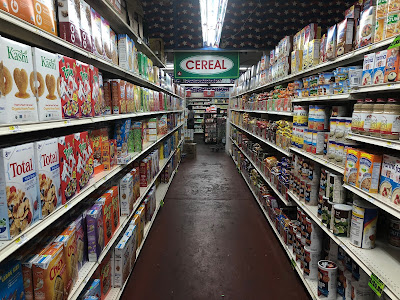 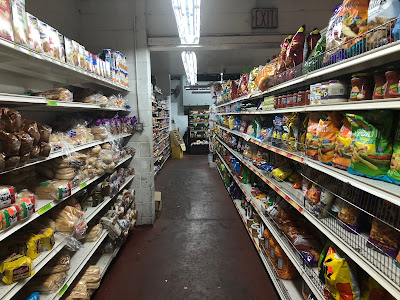 This exit sign is a relic from some long-ago tenant, as it now is nowhere near a perimeter wall, forget an exit. I'm surprised it doesn't have to be removed for fire code reasons, but it's also not lit up (as it is designed to be). 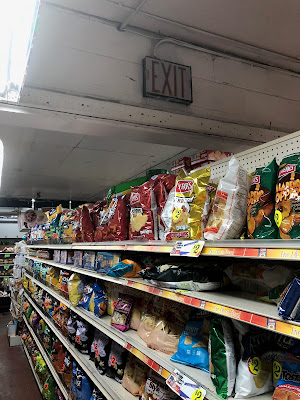 Exit into the potato chips! I would say dry goods take up roughly 1/2 of this store, which is in the 30,000 square foot range. 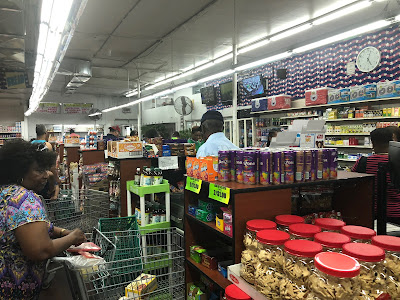 Crowded front end. And from these exterior shots as we drove around the store, you can see just how many times the store has been expanded. 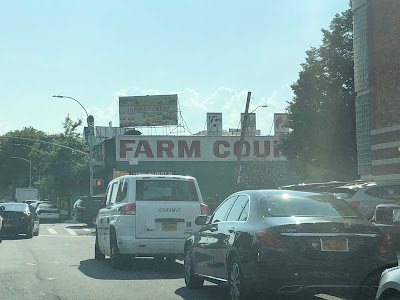 The side wall of the store has an enormous FARM COUNTRY FOODS sign painted across the building. I believe this location was the original Farm Country. 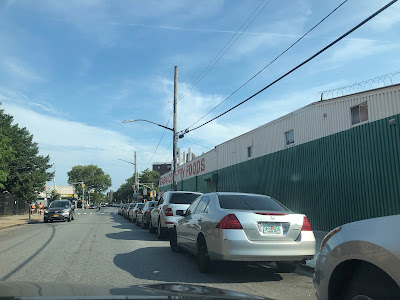 I give Farm Country a lot of credit for choosing something and doing it right. There are a few of this style of store in and around New York City, the ethnic/fresh warehouse type place. I would highly recommend going to a store like a Farm Country at some point (to a certain extent, Western Beef and Food Bazaar stores are similar, but not exactly the same, especially the newer locations). It's quite the experience!