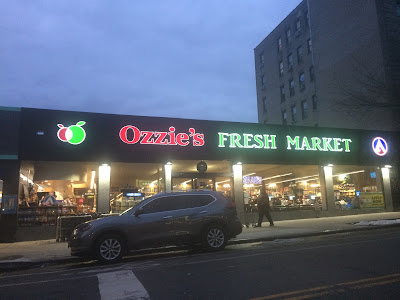 Formerly branded Associated Supermarkets, this location in the northern end of Manhattan is now Ozzie's Fresh Market (note the Associated logo remaining on the right side of the storefront). The Associated was scheduled to be replaced by Walgreens, but after an enormous backlash, the property owners agreed to let Associated stay on the condition that they'd remodel the store. Contributor Steve M. brings us a nighttime look at this nicely illuminated store. There is a second Ozzie's (also a former Associated), which operates with Key Food's Food Universe Marketplace banner, in the Williamsburg section of Brooklyn. I can't help but wonder whether this location will also be switched over to Food Universe sooner or later. Post-renovation, this store looks fantastic.