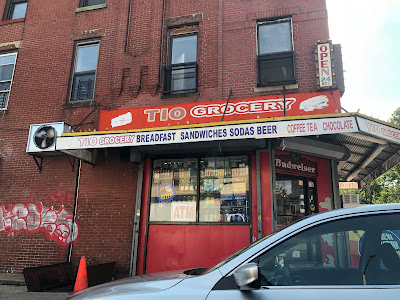 Another small bodega today, this one is just north of Atlantic Avenue (a major east-west artery through Brooklyn) at the corner of Rockaway Avenue (a north-south artery) and Herkimer Street. It's generally somewhere between the southern part of Bushwick and the northern part of Brownsville. It's easiest to just call this "East New York," but I think we're going to go with Bushwick. Anywho, the only reason I photographed the store is because I was moderately amused by "breadfast" (instead of "breakfast") on the store awning. Yeah, that's it. Yep, that's what I'm passing off as a post for today. But that's our last small store or bodega for several weeks now! All supermarkets here and on The Market Report going forward.