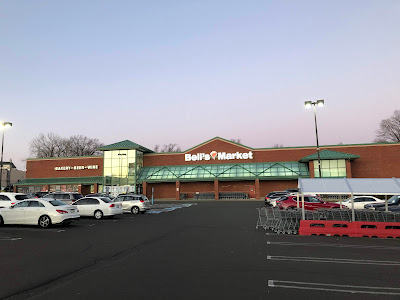 Welcome to the Bell's Market of Feasterville-Trevose, a very interesting store for a few reasons. It was constructed as a Genuardi's in 1998 on the site of a former Food Fair, then sold to GIANT Food Stores when Genuardi's went under. In 2018, GIANT moved to a new location a few blocks west, and Philadelphia-based Russian supermarket Bell's Market moved in. They did some light renovation, but the bones of GIANT and Genuardi's are still there 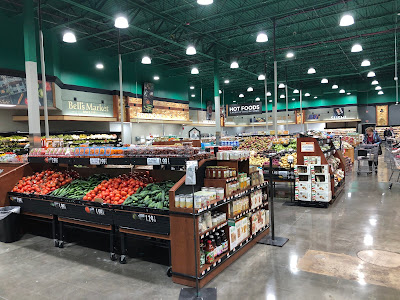 We enter on the left side of the front to a large, spacious produce department. In the back left corner we have the deli and prepared foods section, with large sections for olives, pickles, prepared foods, and so on. Meat and seafood are on the back wall, with frozen and dairy on the right side. Bakery and pharmacy (not yet open at the time of my visit) are in the front right corner. I get the sense that, although the store is beautiful and well-stocked, they may be a bit over their heads in the 52,000 square foot space. (The other Bell's Market, in northern Philadelphia, is around 33,000 square feet.) 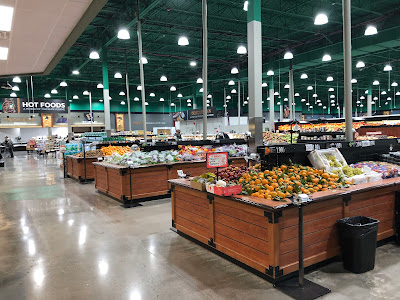 And part of that assessment is the fact that the store is enormous -- or at least it feels enormous, and very spacious, and there was nobody else in the store. 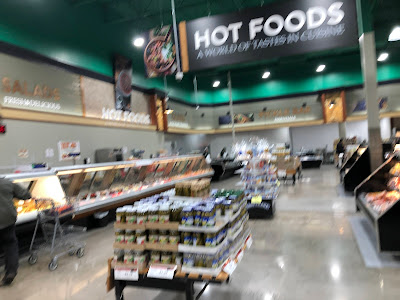 I'm unclear how many of these fixtures are left over from GIANT, but the decor largely is. We'll see a GIANT with this decor intact very shortly. 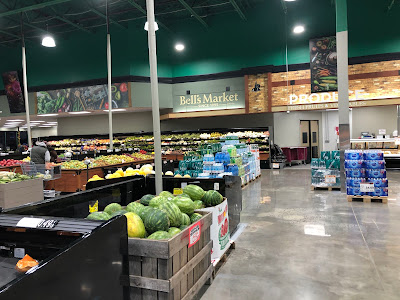 I wouldn't necessarily say that the store shows signs of failing, but it doesn't appear to be very high volume. It does seem that a service department (or maybe a cafe) was taken out in the front left corner, shown to the left above. 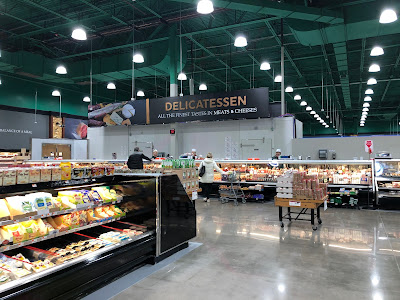 Here's an overview of the large deli department, which is in an island opposite the prepared foods cases. Again, I'm not clear on what GIANT or Genuardi's layout would've been, so I'm not sure if this is different. The green Genuardi's ceiling is intact, and works quite nicely with this decor. 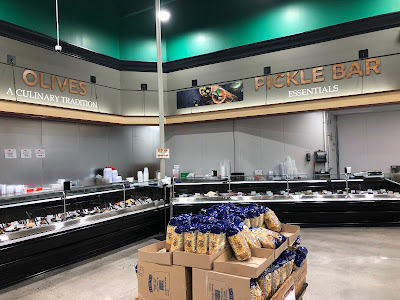 One small non-Russian feature is the sushi department, at the back of the grand aisle. As we see, there's a small Asian food section here, and then a large case of Eastern European fish products next to it. 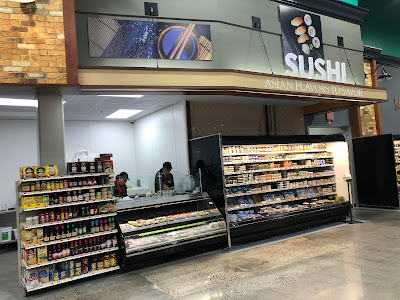 And as we turn and continue along the back wall, we move on to packaged meat, with service seafood and butcher beyond it. 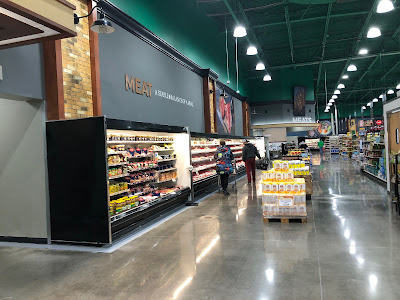 An overview back across the prepared foods-deli area. Again, the space really is beautiful, but it's just way too empty (of customers). Maybe in the last two years, they've really found their footing and established themselves as the premier eastern European supermarket in the area -- which they are, except for perhaps a few assorted NetCost Markets -- and they have drawn in more customers. At the very least, the store is still open, so it's not a total failure. 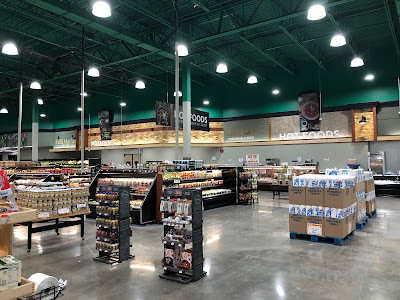 The grocery aisles rely heavily on the international food selection, but again, the store is quite large for Bell's so there is mainstream American grocery mixed in throughout. 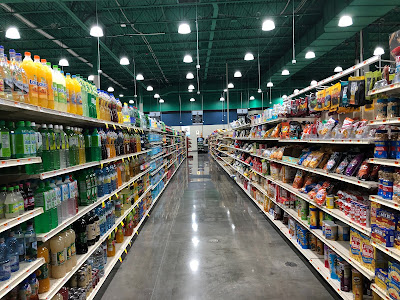 Did GIANT (or Genuardi's, for that matter) have polished concrete floors here? Or was it tile that was scraped up by Bell's? 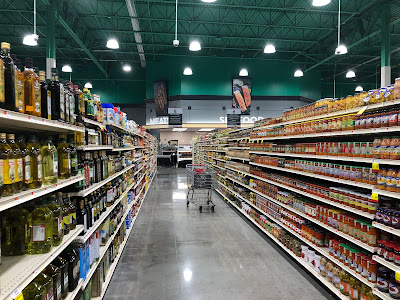 I do like the look of the polished concrete, as usual, but I also think that it makes the space look extremely warehouse-y, especially with the high ceiling and lack of customers. Maybe it would be different when the store is full. 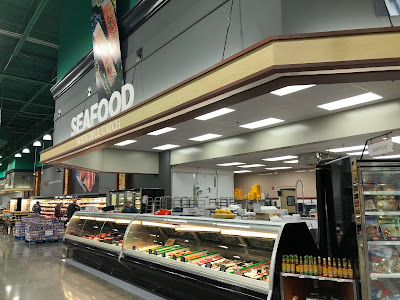 Here's the service seafood and meat department. This decor is mostly left over from GIANT, with different lettering and pictures (plus new paint). 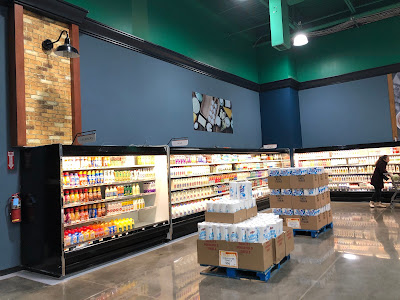 Here we move on to dairy in the back corner. 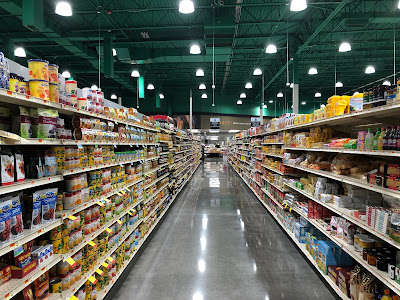 It looks like the last few aisles are pretty densely stocked with standard American groceries, instead of being spread throughout. Note the IGA brand products. 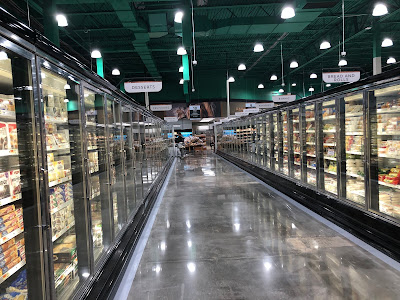 Frozen foods and dairy are in the last two aisles. 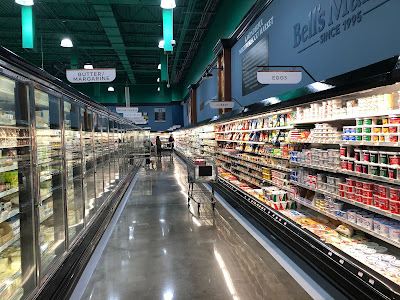 And the front corner contains the bakery and pharmacy. I'm not clear on whether or not the pharmacy ever actually opened, but it had not yet when I visited. 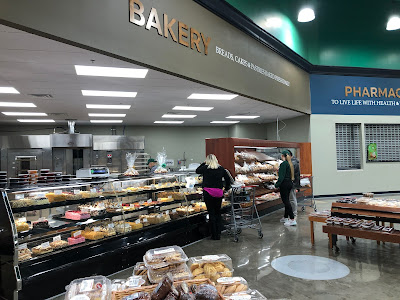 And the front-end contains customer service near the entrance/exit, with self-checkouts on this end. Again, there's simply no one here, but I did visit towards late afternoon so maybe it was just an off-time. 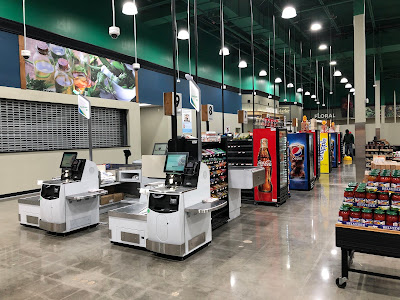 That's all for Bell's Market! Up next we're headed slightly to the northwest for a stop in Horsham, over on The Market Report!