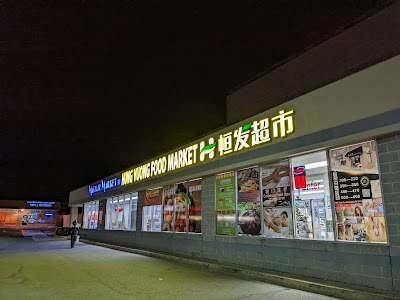 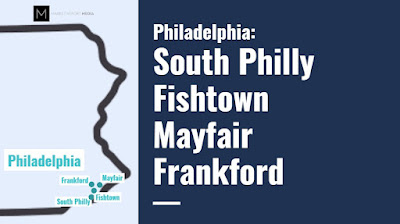 Just about a quarter mile west of yesterday's ShopRite is the 30,000 square foot Mayfair Market by Hung Vuong. The Asian supermarket chain opened up shop here in 2019 following the closure of the Mayfair Shop n Bag in 2017. The Mayfair Shop n Bag was one of two that outlasted the Shop n Bag cooperative, but the other is actually still going strong as part of Allegiance Retail, the cooperative that supports Foodtown, Green Way, Pathmark, and others. 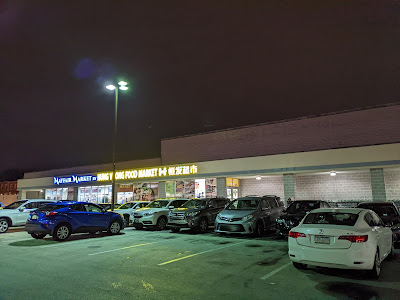 Hung Vuong Food Market already had two locations in Philadelphia at the time this store opened, and a fourth opened in 2020. I'm not sure about how this store compares to the others, but it felt like they were making an attempt to add some basic American groceries here alongside the imported Asian products to fill some of the need left by Shop n Bag, but I also think the ShopRite and Save-A-Lot are very close so they don't need too much of that. 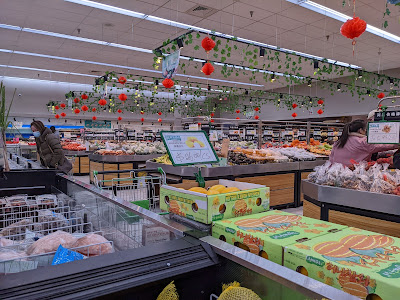 I have no idea what Mayfair Shop n Bag's layout would've been like, or their decor, or fixtures, or so on and so forth, so unfortunately I can't report on that. It does look like Hung Vuong pretty extensively remodeled the place before they opened, with what look like all new fixtures, flooring, lighting, etc. There's not much decor here, so I wouldn't exactly say they left anything from SNB but it also doesn't look like they added much in themselves. 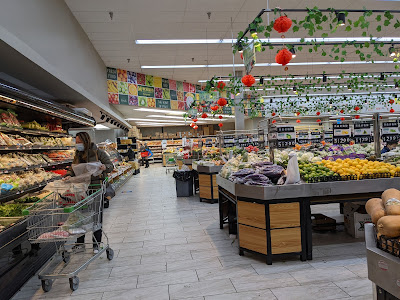 Produce and meat are at the beginning of the store, on the right side. The butcher counter is in the front right corner of the store, with produce on the right side of the grand aisle. Seafood is at the back of the grand aisle, with frozen foods running along the left side. Dairy and refrigerated are in the back, with additional frozen foods in the last aisle and a candy and snacks area in the front left corner. 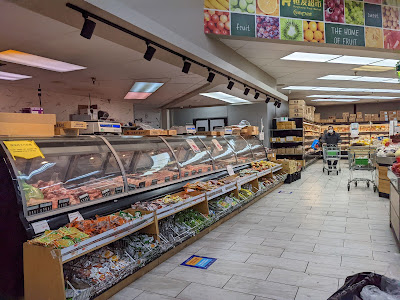 Again, it looks like all of the fixtures and everything else here are new, although I suppose it's possible this department was Shop n Bag's deli. It feels more likely to me that a service department, probably deli or bakery, was at an angle in the front corner with the angled wall we see above, and the space behind it was prep area. 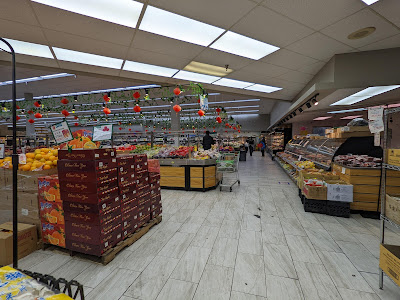 Looking out from the front corner into the grand aisle. I like the flooring a lot here, since it's subtle but not too boring. 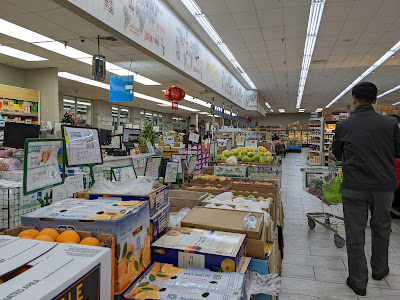 Here's a look across the front end, with the registers visible to the left and customer service behind the bulk produce items here. 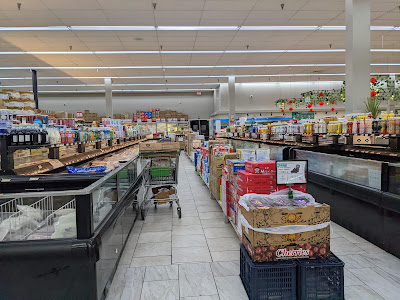 And the first few aisles are low coffin cases, which is a nice touch since it means we have great sightlines across the store. 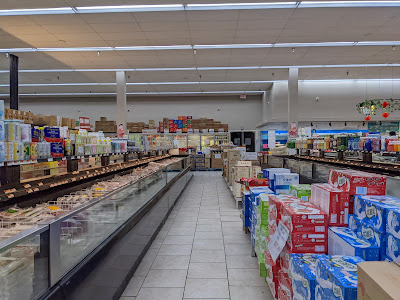 As we can see, the merchandise is pretty packed in here but they do have a large selection. 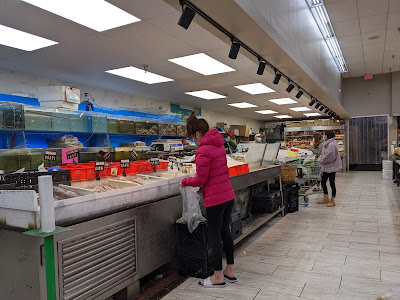 Large service seafood counter at the back of the grand aisle, with live seafood in tanks behind the counter. 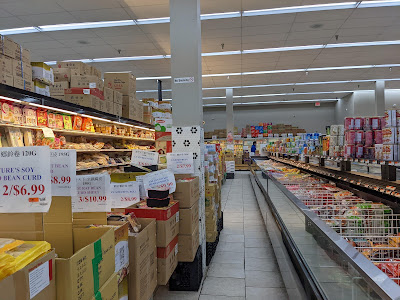 And we see one row of refrigerators before we move into grocery aisles on the other side of that. Consequently, about 50% of the store's sales floor is dedicated to perishables, refrigerated, and frozen, with a relatively small area left up to grocery aisles. 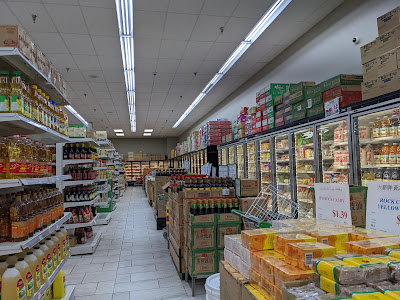 Here's a look at dairy and other refrigerated foods on the back wall. 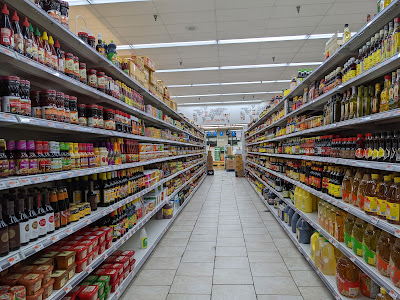 As we see, the aisles are kept pristine and organized here. Very nice. And the place is very bright, too. 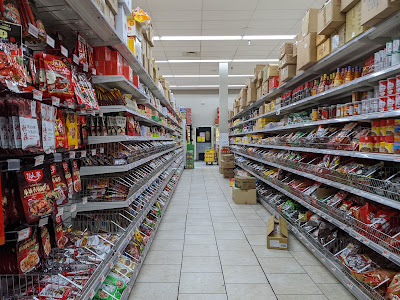 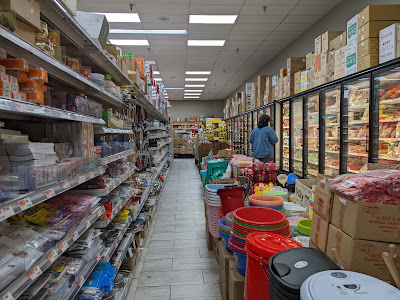 In the last aisle, we have frozen foods on the outside. It's possible these cases are left over from Shop n Bag, but if so, they were at least repainted. 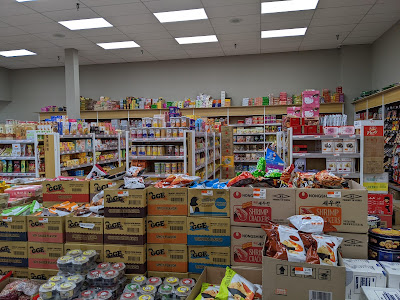 And here's the candy alcove in the front. Looks like the registers may be left over from Shop n Bag, though... 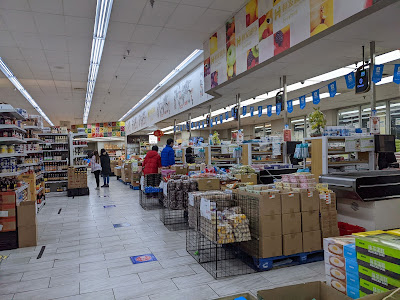 As we see, Hung Vuong did a very nice job remodeling this old Shop n Bag and maintain it very well with a lot of fresh foods. However, I just wish there were some decor on the walls to complement the nice product displays! (Luckily, they seem to have figured that out for Cherry Hill.) Before we move out of Mayfair and onto Frankford, we do have three more stops, all up on and near Roosevelt Blvd again. Head over to The Market Report tomorrow to check out the first!