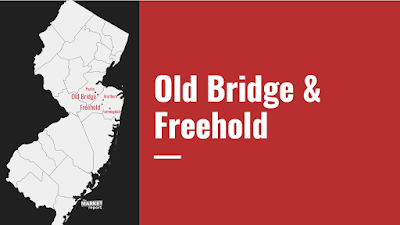 No time to rest! We just finished the Monmouth and Ocean Shore group yesterday, and tomorrow we move inland while circling back north for our next group. We won't exclusively be seeing stores in Old Bridge and Freehold, but those are the two largest towns we'll be passing through to use as landmarks. We start just inland from Belmar with Farmingdale, then continue through Freehold, Marlboro, Manalapan, Englishtown, Old Bridge, and Parlin from south to north. That will take up approximately the next two weeks before we cross the Raritan River once again and move on! For the bigger picture, we're moving back north through the inland counties: western Monmouth/Middlesex, Somerset, western Union, Morris, then up to Sussex and the northern tip of the state, the continuing down the western part of the state through Hunterdon, Warren, Mercer, and Camden/Burlington. But the journey of a thousand supermarkets begins with just one store, as the old saying goes... so let's jump into our first store tomorrow here on The Independent Edition!